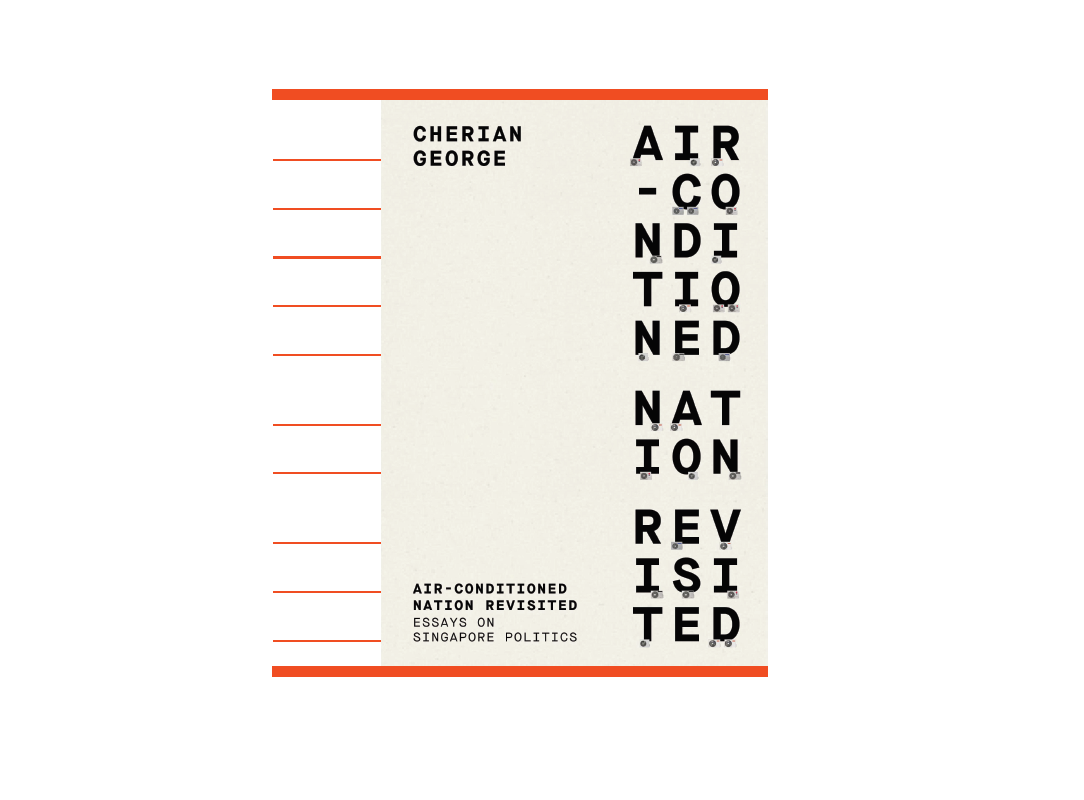 It is June 2020. As the country battles a global pandemic, along with the ugliest sides of society it has uncovered, the government speaks about holding elections. “The sooner the better,” they say, to rally Singaporeans together to tide through uncertain times. I remain unconvinced by this argument. How does having an election unite the country? What motivates – or scares – our political leaders so much that they deem an election essential during such a precarious time? For some answers, Cherian George’s book is a good start and could not have arrived at a better time.

Air-Conditioned Nation Revisited is an anthology of 37 essays on Singapore politics, drawing upon George’s earlier books, Singapore: The Air-Conditioned Nation (2000) on the country’s politics of comfort and control, and Singapore, Incomplete (2017) on its underdeveloped democracy. The collection also includes two new essays on Singapore’s fourth-generation (4G) leadership and the Protection from Online Falsehoods and Manipulation Act (POFMA). The essays are divided into seven sections. ‘The Singapore Model’ outlines what makes Singapore politics uniquely Singaporean; ‘Palace Intrigues’ revolves around Lee Kuan Yew’s legacy in the PAP, as well as the role of the president in the country; ‘Electoral Politics’ discusses the opposition in Singapore; ‘Upgrading the PAP’ talks about the party’s aversion to internal reform; ‘Controlling the Message’ reveals the inner workings of government- media relations; ‘National Identity’ deals with how we deal with diversity; and ‘Disciplining Dissent’ highlights the discriminatory treatment of different types of activism and activists.

The book is not exactly Singapore Politics 101. It does not delve into specific historical events or policies in great detail (we have our Social Studies textbooks for that). Rather, the incidents that George cites, like the Catherine Lim controversy in 1994, the Oxley Road saga, and the Reserved Presidential Election in 2017 (one of the few watershed political events), to name a few, are used to illuminate the context in which political decisions were made and policies formulated. George even includes a personal account, in the chapter ‘Experiential Learning’, of what happens when you even unintentionally ruffle the feathers of the powers-that-be.

In this sense, the book reads more like a collection of reflection pieces than academic essays. This should encourage the average Singaporean who claims that politics is not their cup of teh (or kopi) to pick up the book to understand the system we are operating in. Further, George’s writing does not alienate or intimidate. The book is not unnecessarily peppered with academic jargon. Instead, there is the occasional reference to pop culture (the late Lee Kuan Yew being more like Marvel’s Dr Strange with an array of tools at his disposal to wield more power than Iron Man) and of course, everyday items, like the metaphor of the “air-conditioned nation”.

George introduced the metaphor two decades ago and the fact that it can still be applied today is testament to the enduring relevance of his scholarship. It also shows that the political culture in Singapore has not gone through any serious reform.

In an air-conditioned nation, comfort and control are not contradictory. Rather, comfort is precisely achieved through control. For some of us who love or need air-conditioning in our lives, we can even understand how we may even willingly give up certain freedom or rights for the sake of comfort. I, for one, would at times refuse to step out of my air-conditioned office into the unforgiving heat during lunchtime, and would rather order food and eat at my desk. Other times, my office might be freezing but I have grown accustomed to it and would only throw on a sweater. In sweltering Singapore, the ability to stay and move around in temperatures below 25 degrees is a blessing. It was no wonder that the late Lee Kuan Yew named the air-conditioner as the most influential invention of the millennium.

Similarly, the air-conditioned nation, George argues, is first and foremost designed for the very purpose of providing material comforts for its inhabitants. Moreover, in a precarious and volatile world today, having central control does not only benefit its people but is proving to be the more effective system as opposed to decentralised governance. It seems like we have it good.

But that does not mean we have it all. There are trade-offs to an air-conditioned nation that is centrally controlled: individual autonomy, structural inequality, and ultimately, a system so rigid that it might find itself struggling to keep up with new global developments that will have local impacts.

“Singapore’s tragedy is not the total absence of idealism, but that it systematically rewards the individualistic majority and discourages the socially conscious minority.”
– from the chapter, Next, Air-Conditioned Underwear?

What I appreciate most about this book is that it offers a more sophisticated understanding of what makes Singapore exceptional. We are all too familiar with the state’s narrative of the Singapore story: despite being small, vulnerable, resource- scarce, and ethnically and religiously diverse, Singapore is able to punch above its weight, maintain a buoyant economy, and avoid riots all thanks to a strong and stable government implementing sound policies. Undeniably, while Singapore’s successes are commendable and can be attributed to the People Action Party’s (PAP) good governance over the past five decades, George highlights other factors that set Singapore apart from other democracies and authoritarian regimes. These include a highly cohesive elite, internally in the PAP, as well as across government-linked corporations, state-owned companies, and statutory boards; the use of calibrated coercion instead of brutal repression; and the clever use of politico-legal strategies. All these factors ensure that the government retains its dominance and “creates the sense that Singapore’s stability is due to a strong consensus”.

It is also refreshing to be treated like we are mature enough to appreciate and understand the nuances and alternative voices in our political discourse, since we are always talked to as if we do not and cannot know any better. This book is a much-welcomed view than being constantly told that only the government knows best and they can do no wrong. I echo George’s sentiments when he says that he wants “leaders who believe they know best—but are equally certain that they don’t know it all”.

“Today, First World Singapore is a middle-aged republic with a mature economy but a political system that treats us like children: too many decisions are made for us that should be ours to make; we are told what’s good for us and we are ticked off if we answer back. Older generations have lacked either the desire or the strength to resist. A new generation of Singaporeans will have to decide for themselves if they are ready to grow up.”
– from the chapter, Singapore, Incomplete

Ultimately, it is clear throughout the book that George’s criticisms of the government come from a place of love. He says, “I see no contradiction between feeling fortunate for having been born Singaporean, and a persistently critical stance towards my country.” Neither do I nor, I suspect, the many of us who continue to hope for a Singapore that we can be proud of beyond its material achievements. ⬛

After reading politics as an undergraduate, Nursheila Muez currently works as a research analyst in a government think tank. She is also the founder and co-editor of AKAR, an independent magazine that features stories and histories of Singapore and Southeast Asia.