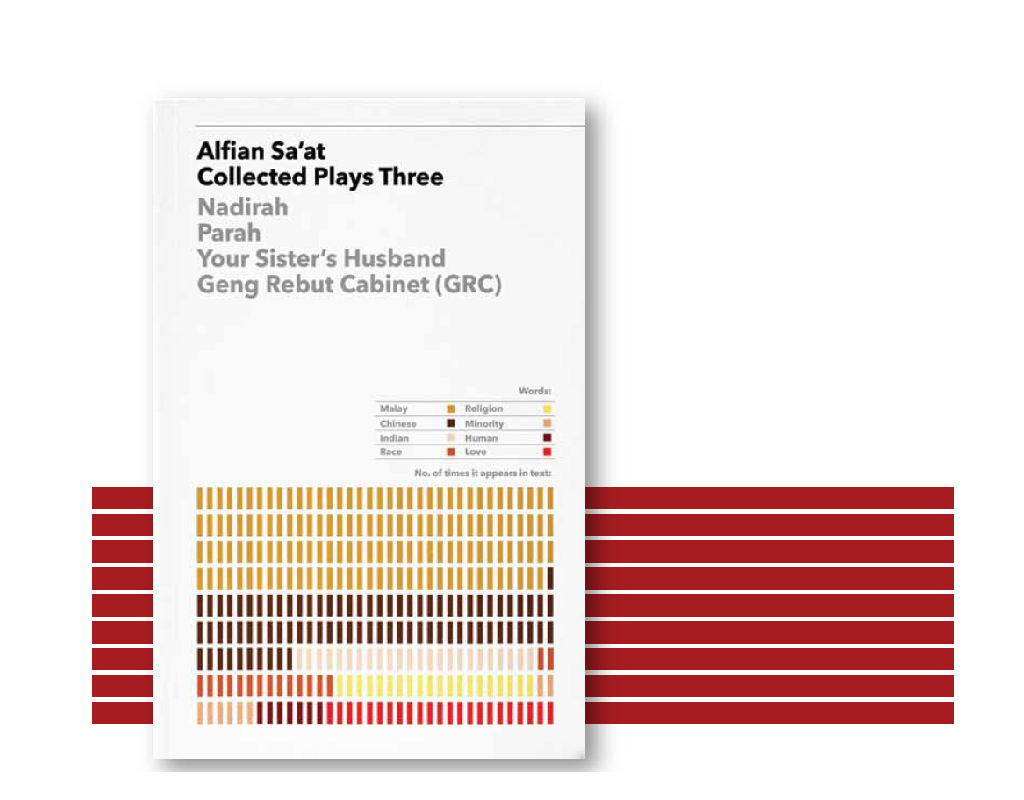 Collected Plays Three is the third volume of Alfian Sa’at’s Collected Play series. For the first time, plays that have been written and staged in Malay are translated into English for readers. The four plays in the book consist of Nadirah, Parah, Your Sister’s Husband and Geng Rebut Cabinet (GRC). As always, Alfian brilliantly explores the issue of Malay identity and race relations in this volume.

The book starts with a thoughtful introduction by Dr Nazry Bahrawi, titled Meditations on Brown Humanity and starts with a poem by Indonesian poet, Chairil Anwar. The introduction prepares the audience for works that revolve around the question of identity, a key issue that is often discussed in the plays.

PARALLELING  REAL LIFE
Alfian responds to the late Malaysian filmmaker, Yasmin Ahmad’s Muallafin his play Nadirah, which was staged in 2009. Much like the film, Nadirah explores the topic of interfaith love between a Chinese man and a Muslim woman. However in his play, the ‘star-crossed’ lovers are  not as young as the ones in the film. Parah meanwhile looks at the‘Interlok’ controversy in Malaysia that happened in 2011, where the novel by Abdullah Hussain was deemed to portray the Indian community in a condescending manner.

Back in Singapore, Your Sister’s Husband (Kakak Kau Punya Laki) is a response to the assumptions about Malay and Islam, and ‘fighting terror’ in Singapore post the escape of Mas Selamat Kastari, the suspected terrorist that escaped prison in 2008. Geng Rebut Cabinet (GRC) also addresses affirmative action and political manipulation relating to the 2015 General Elections. Geng Rebut Cabinet is written intelligently yet playfully, switching the minorities as majorities in this play.

If one is familiar with Alfian’s works, they can expect issues to be brought up sometimes in a very subtle but humorous way. These are issues that are painfully real to the community, but at the same time, are weaved from real life into fiction so uniquely. An instant read would draw you into the attention or issues that Alfian is trying to raise to readers. Some issues raised are those that are often talked, complained or even joked about in the Malay community. They are raised across different plays and are hard to miss, as highlighted in Dr Nazry’s introduction as well.

Shidah: What can I say? He’s a Malay pilot. But a commercial one. The one Air Force pilot is already married. Geng Rebut Cabinet also raises this issue as well, but in a less subtle manner.

The conversation revolves around the Air Force, this time between two parliamentarians.

Bukhari: I’ve also contacted the current Chief of Air Force. I asked him to reconsider that one Chinese fighter pilot every ten years policy.

Catherine: And what did he say?

Bukhari: He said it’s possible. In fact he wants to aim for ten Chinese fighter pilots every year.

THOUGHTS
Works revolving around the issues of identity, authoritarianism and faith are not new to Alfian. They are issues that fans of his works would consciously or unconsciously seek out, whether in his writing or through the staging of his plays. And at a time where identity politics and works revolving identities are taking centre stage, Alfian maintains his style of writing – one that makes readers reflect on their own identity, and where they stand in their country.

As always, Alfian isn’t afraid to confront issues that are otherwise restricted to personal conversations or are deemed too ‘taboo’ to talk about. He doesn’t hide from addressing issues on inter-racial relationships, governance and policymaking, and he writes it in a way that entertains and at the same time, provokes the thoughts of the readers. This book gives readers a chance to read his plays, especially if you have missed the staging before. While translated into English for everyone, you can only imagine how it would be like in the original Malay language.

Alfian is also critical of religious authoritarianism but is not anti-religion. Instead, he highlights how there is an over-reliance in scientific thinking, how society places emphasis on science, technology, engineering and mathematics (STEM) and how there are different factors that lead to religious conservatism, as seen in Nadirah.

As with the films of the late Yasmin Ahmad, I also felt a sense of longing and a dream – one that constitutes everyone wondering what it really means to be part of a country where everyone holds equal rights, where love transcends race, faith and nationality. When one watches her films, whether it’s Sepet or Talentime, it almost seems like a utopia, one that minorities would dream of. This can be felt for me while I read Alfian’s writing. While he is critical of issues, the writings of his plays also allow space for us to dream. The writings will make you laugh, pull at your heartstrings and cry even.

With identity politics being a hot issue right now, it seems Alfian’s work is what we need. His writings allow us, away from the commentaries and academic work, to see through issues that affect us all through another medium. We need critical voices like Alfian, who is able to raise issues in a creative manner, necessary to allow critical discourse that might be seen as sensitive to even start. ■

Mysara Aljaru is a Master’s candidate in the Department of Malay Studies in National University of Singapore. Prior to this, she was a journalist and producer with local mainstream media. Her writings have also been published in Growing Up Perempuan and Budi Kritik.