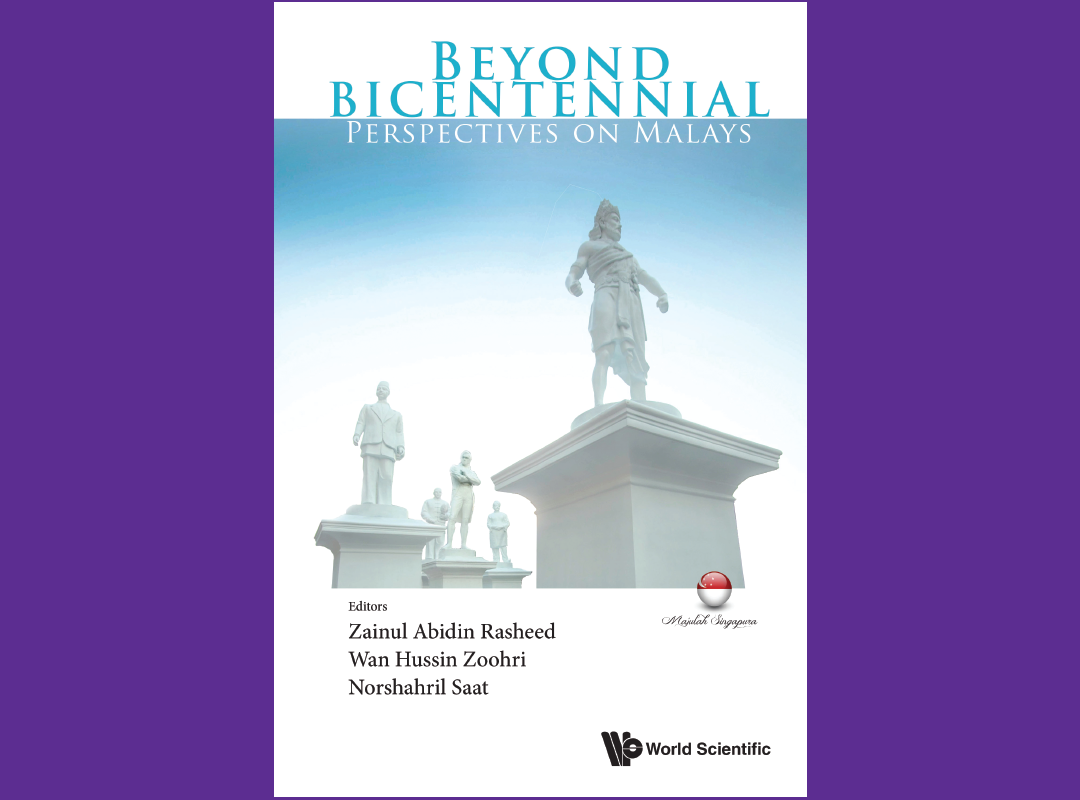 When Singapore commemorated the 200th anniversary of Raffles’ arrival on the island last year, many dialogue sessions were held for the public to discuss and reflect on Singapore’s history. Through these dialogues, the public saw competing views on Singapore’s history. More critical voices emerged to challenge the dominant narrative on Raffles, the history of Singapore and the colonial construction of the Malays. These conversations were also present on social media platforms. Following the end of the bicentennial year, the recent publication of Beyond Bicentennial: Perspectives on Malays edited by Dr Norshahril Saat, Wan Hussin Zoohri and Zainul Abidin Rasheed is timely as it allows readers to follow up on conversations that had emerged last year. It is an essential book that ensures a diversity of voices continues to be present in the community.

As the title of the book suggests, Beyond Bicentennial seeks to “document multiple views on the Malays” (p. xxviii) and invites readers to think about moving beyond bicentennial conversations. The book consists of a collection of articles and reflective pieces written by more than forty individuals that echoes competing narratives on the Malays. Topics written are diverse and span from the pre-colonial to post-colonial period. However, the sheer volume of the book shows that the Malay community and history have always been dynamic and filled with complexities. Even though studies on Malays have been quite established, contributions in this book prove that there remain many aspects of the Malays that are worth exploring.

ALTERNATIVE NARRATIVE ON THE MALAYS
While the book is not meant to be a compilation of critical pieces, some articles present an alternative lens on the Malay community and history. One such attempt was done by Sarafian Salleh on the topic of Orang Laut. The author posited that Orang Laut have often been misunder- stood and misrepresented in our historical memory. As a society that inherited the colonial accounts of the natives, we grow up understanding Orang Laut as “pirates, barbarians and uneducated” (p. 103). However, the author challenged this dominant narrative. By doing further research and interviewing the direct descendants of Orang Laut, Sarafian found that the Orang Laut were “hospitable as a community and great warriors” (p. 103). They also played important roles in Singapore’s history. For instance, Wa Hakim was an Orang Laut who welcomed Raffles and Farquhar upon their arrival at the island, and also kept accounts on the two colonial masters. Sarafian’s findings on the Orang Laut is an important contribution to Singapore’s discourse on the natives. His findings point to an alternative narrative of Orang Laut, hence strengthening the arguments for a critical reading of Malay history.

Similarly, Dr Norshahril noted how the historical narrative of the Malays often depended heavily “on colonial sources of historiography, and preference for written records” (p. 13) which are regarded as authentic. In contrast, accounts by local natives that come in the form of literature, myths and fables are not taken seriously because they are thought to be illogical. Equally understudied are Indian and Arabic records of the Malays. Dr Norshahril argued that exploring these sources is very important because the Malays have had established networks with the Arabs and South Asians which pre-date the colonial arrival at the island.

MALAYS AS ACTIVE AGENTS AND CONTRIBUTORS TO SOCIETY
Apart from presenting articles on alternative discourses on the Malays, Beyond Bicentennial also featured articles that showcase prominent figures in the Malay community. These figures had contributed to the development of the Malays and the wider community from the pre-colonial to post-independent period. While some of these figures are widely known, it is worth revisiting their stories to understand how they are part of the Malay community. In this case, they have used their agencies to contribute to society’s progress. Often, we forget that the Malays have a voice of their own and were, in many ways, involved in historical processes from the pre-colonial period until the present day. The lack of mention about their roles in the dominant narrative does not mean that the Malays were passive as portrayed by the colonials. Their voices have always been present, and their contributions are no less important than other communities. It is essential then to uncover these stories and enrich the discourse on Singapore’s history.

One such attempt was undertaken by Muhammad Suhail who presented an interesting study on Sahorah Ahmat, the first Malay female representative in the legislative assembly. Unlike the other pioneer generation of assemblymen, Sahorah Ahmat was less known to the present generation. She was only known for her pivotal role that saved the People’s Action Party (PAP) from a potential collapse. However, further research shows that Sahorah had also contributed in many areas including fighting for women’s rights. Such study is an essential contribution in two ways: first, it shows that the Malays play an important role in historical processes. It is through the active participation of Sahorah as an individual with agency that allowed the PAP to persist. Second, it sheds light on the contributions of a Malay woman which are often understudied. Most of the prominent figures whose contributions have been extensively studied and are widely known tend to be male.

WHAT’S NEXT?
The important question to ask upon reading this book is how do we move forward with the competing narratives that have recently emerged during the Singapore Bicentennial? What do we make out of the contestation of ideas, and how do we accommodate alternative discourses in our historical memory that is already occupied with the more dominant colonial narrative of the Malays and Singapore history? Is there room to include alternative discourses in our school curriculum and policy-making? It would seem redundant if these contesting views only float around within the community without affecting real change. On one hand, it would be a tedious task to undertake if we decide to tweak the official narrative to include alternative discourses that have recently emerged. At the same time, ignoring alternative viewpoints altogether, especially after studies and findings have been established, is not wise. It may impede the community’s progress in tackling issues such as inequality and the disproportionately high number of underprivileged Malays, which originated from the colonial narrative on race. The important but difficult task in moving forward is to balance between embracing alternative discourses and ensuring that it does not harm social cohesion.

Dr Sher Banu Khan made an interesting contribution to address this matter. In her article, she contends that it is possible to write a history for nation-building purposes that precedes 1819 by reframing the Malay past. Not only did she argue that such a project would provide a “more inclusionary national history but could also provide the link to regional and global history” (p. 24). Her argument challenges the dominant belief that nothing in the history preceding Raffles’ arrival in Singapore provides a shared memory between all races. However, according to Dr Sher Banu, it is precisely the idea of race in the form of the Chinese-Malay-Indian- Others (CMIO) model that poses the problem. Much of the Malay history shows its interconnectedness with regional and global communities. While the Malays and other communities might not originate from the same land or share similar cultures, they “are a part of a shared history of a nation made up of various hardworking, globally connected entrepreneurial immigrants with shifting and fluid identities” (p. 25). A further study on the pre-colonial Malay community suggests that “there was not yet separate ethnic quarters but rather a mixing tending towards hybridity” (p. 24). Hence, it is possible to recreate a national history that predates 1819 that is inclusive. However, this also requires a shift away from the rigid CMIO model and existing idea on multiculturalism to a “more porous cultural boundaries which leaves space for cultural and national inclusivity” (p. 41).

By compiling a wide range of topics written by contributors, Beyond Bicentennial has managed to achieve its objective, which is to present multiple, but balanced, perspectives on the Malays held by both Malay and non-Malay writers. More importantly, the diverse topics show us the complexities of the Malay community and how the Malays are a dynamic category that is interconnected with regional and global communities. Articles that present fresh perspectives on the Malays such as the chapters on Orang Laut and Sahorah Ahmat remain useful contributions, which are hoped to encourage readers to explore various aspects of the Malays and study them from non-colonial accounts.

The lack of academic jargons in this book allows for wider readership. It can potentially increase the public’s awareness on the contestation of discourses on the Malays and challenge them to think more critically about the dominant narrative on the Malays and Singapore history. For academicians and researchers, Beyond Bicentennial may inspire further research on the history of Malays from the lens of natives, Arab and Indian traders. For policy-makers, this book may help clarify the importance of having a balanced perspective on the Malays in the community and opens up the prospect of having such balanced perspective being translated into policy-making. However, such changes are unlikely to come soon. While a real policy change is ideal, it is also on readers to ensure that lessons learned from the Bicentennial discussions can help society move forward and overcome future challenges. ⬛

Nur Syafiqah Mohd Taufek is a graduate of the National University of Singapore and is currently working as a Research Officer at the ISEAS-Yusof Ishak Institute. Her research interests include socio-religious issues and topic of gender in Southeast Asia.