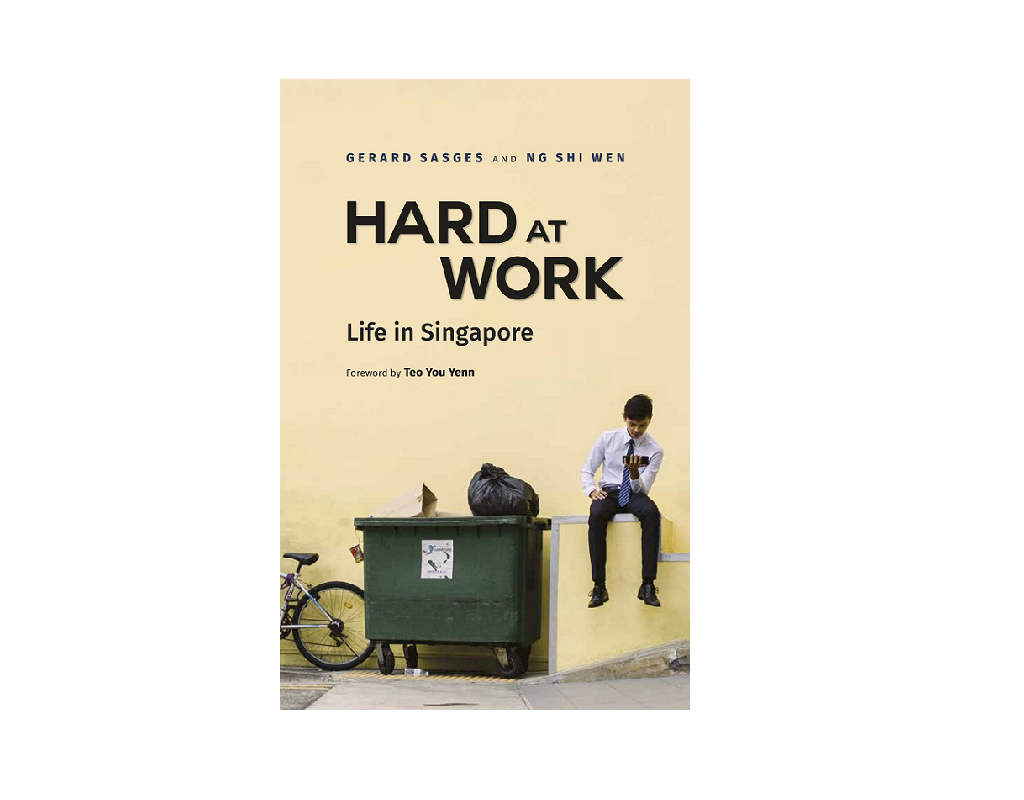 At first glance, I was intimidated by the sheer volume of the book. It’s Hard at Work: Life in Singapore published under the Ridge Books Imprint by NUS Press. Was this a university textbook, or one of those academic anthologies that usually never see beyond the walls of the university library? I expected it to be covered in MLA or APA citations, chapters of analyses and referencing other academics. After all, author Gerard Sasges is a historian and associate professor at the National University of Singapore (NUS), and his latest book features a foreword by celebrated sociologist, Teo You Yenn. Upon closer peeking and skimming, I found myself becoming less skeptical and more impressed with its rich offerings. The ilk of the book resonates similarly to the socially engaged works such as the online documentaries of ‘Humans of Singapore’, ‘Our Grandfather Story’ and ‘Can Ask Meh?’ – slivers of everyday Singaporean stories revealed through clever storytelling and heartfelt interviews.

I thumbed through its many pages and my first encounter, by chance, was:

And so I flipped to the other pages and started reading these gripping confessions. That was enough for me to buy the book immediately. I was fascinated by the frankness of these accounts. It felt like firstly, someone was talking directly to me and candidly sharing a slice of his/her life. Their personal voice came through convincingly and the authenticity of their accounts clearly originates from masterful transcribing of having a real conversation with them.

In the introduction by Gerard Sasges, he revealed that this book was a labour of love built by many hands – he specifically mentions all of his student collaborators who took on the task of doing the groundwork and he also guided them throughout the process. He mentioned three commitments which he upheld – working ethically, with empathy and responsibility, and high level of respect to the interviewers and their accounts. No wonder this book succeeds in empathy-building instead of belaying sympathy to the reader which speaks a lot about the ethical process and educational value behind producing this book. I think it was incredibly clever that each account was crafted around an interview. I could have guessed the questions asked by the interviewers, but the ultimate product of that interview was framed into a monologue of sorts. Each person shares generously about their lives and inescapably, reveals nuggets of information that tell us more about their work ethic, their struggles and dreams. There is a strong social commentary on what drives them at work each day, but it is pitched towards the lens of social and personal development – I read about the bureaucracy of establishing businesses, the arduous preparation of each day, and stories of success forged by failure and resilience. I also learnt about the systemic devices and norms that could either trap or have been circumvented by the interviewees. And as cliché as it sounds, most of these stories reveal an inspiring take on how proud and purposeful they are at what they do. And thanks to this book, they too now exist more distinguishably in my consciousness.

“I remember the first time I do this ah, I had to walk around and ask people if they want to place their bets with me. You have to be really thick skin leh. Walao, eh, lucky I am hor. But really lor, very hard.”
– Bet Collector, Entertaining, Chapter 13, pg 355.

I particularly enjoyed the careful curation of these people’s accounts. The chapters on Eating, Selling, Moving, Grooming, for example. These services are the commonplace in our lives. We see them at work and so we think we know of them but very rarely do we engage them in a way that really gets us to know them unless we have access to their circles or a reason to engage in a conversation with them. Some of them are also very removed from our social environments such as the Drag Queen, Tattoo Artist or the Hostess Agent, and are often misrepresented in daily media. Hence, it was fascinating to have them explain the complexities and often the untidiness that they face. It felt like building a brand new friendship with them – only that we don’t see who this specific person is! The exact identity of the person is hidden as a way to protect them and also respect their identities (after all, they can only speak for themselves and not the industry that they’re in). But we know so much from just reading about how they feel about their job, how they view themselves, how they reckon others view them, and more importantly, how they talk about their role in society given their livelihood. And so, this book provides that opportunity for us to develop a deeper consciousness about their diverse experiences of work. It frames itself as the starting line of wanting to know them as regular people doing regular jobs with pride and purpose. And by the end of reading each account, we have now have established that amicable connection. Now, for sure, I know a little bit more about their lives other than what I see when they’re at work.

“In my department it was predominantly Chinese, I would say 80 per cent? Initially when I came in I thought it was a bit intimidating, but I realised afterwards it’s because I was the only junior officer who was Malay. I think it wasn’t a problem lah. But you know what was weird for me? There was a trend that when a minority officer who was transferred out or resigned, there will be another minority who is hired. So there is a racial quota. We kind of get used to it, but it’s still a problem. I mean, Singapore majority Chinese right? What do you expect?”
– Investigation Officer, Protecting, Chapter 9, pg 255.

As these accounts are dense with rich first-hand experiences of them at work, the photographs artfully captured by Ng Shi Wen provided the much-needed space for introspection and deliberation. The aesthetic of her photography supports the portrayal of their diligence at work. Her critical eye for detail and visual storytelling heightens the humanising of those interviewed with its compelling colours and dramatic focal points. To me, it also anchors the stories to the familiar sights of when they’re at work, thus, adding to the holistic and enjoyable experience of getting to know them as the person doing the job with all of their imperfections and zest for life.

“Now our government says we all have to be friends. You can see this in any number of things. Ah, like for example, my flat downstairs, if there happens to be a Chinese funeral going on, and then just nice, some Malays want to get married, they want to use that space too. Well, if we wanted to, we Chinese can choose not to give away, you know. But we Chinese, we give in.”
– Temple Flower Seller, Selling, Chapter 4, pg 111.

As a whole, this book was able to capture the personal amidst the public faces of these people which I appreciated tremendously. As we live our lives and go on with our day to day, we often work within our circles of friends and colleagues and we usually know what we do and how we cope with our jobs. How often then do we think and feel for what others do and how they cope with theirs? Very often, I assumed that those featured in the book hold functional, maybe even perfunctory roles in society. Instead, I was fondly reminded to locate an empathetic connection to them and not forget the person doing the job. When I see them at work, I will remember their confessions, struggles, and joys and now, we don’t have to be strangers. I am hopeful that when I am at work, I too am able to offer and receive the same kind of empathy and be hard at work with the suspension of stereotypical judgement of my job. It is with the same hope that perhaps, we should challenge the notion that our jobs make us disposable and replaceable because it is through our uniqueness that shapes our experiences and drive to excel at work. We all have stories to share and are worthy of being heard no matter what we do. ⬛

Ahmad Musta’ain Khamis is an educator by profession, and a theatre-maker by choice. With support from LBKM, he had just graduated with an MSc(Playwriting) from the University of Edinburgh. His areas of interest include drama pedagogy, playwriting and collaborating with marginalised and sensitive communities using theatre. Ahmad is a founding member of Malay playwright circle, Main Tulis Group (MTG) that looks at Malay-centric issues in contemporary Singapore. Ahmad also sits on the Arts Consultative Panel (ACP) for the Infocomm Media Development Authority.