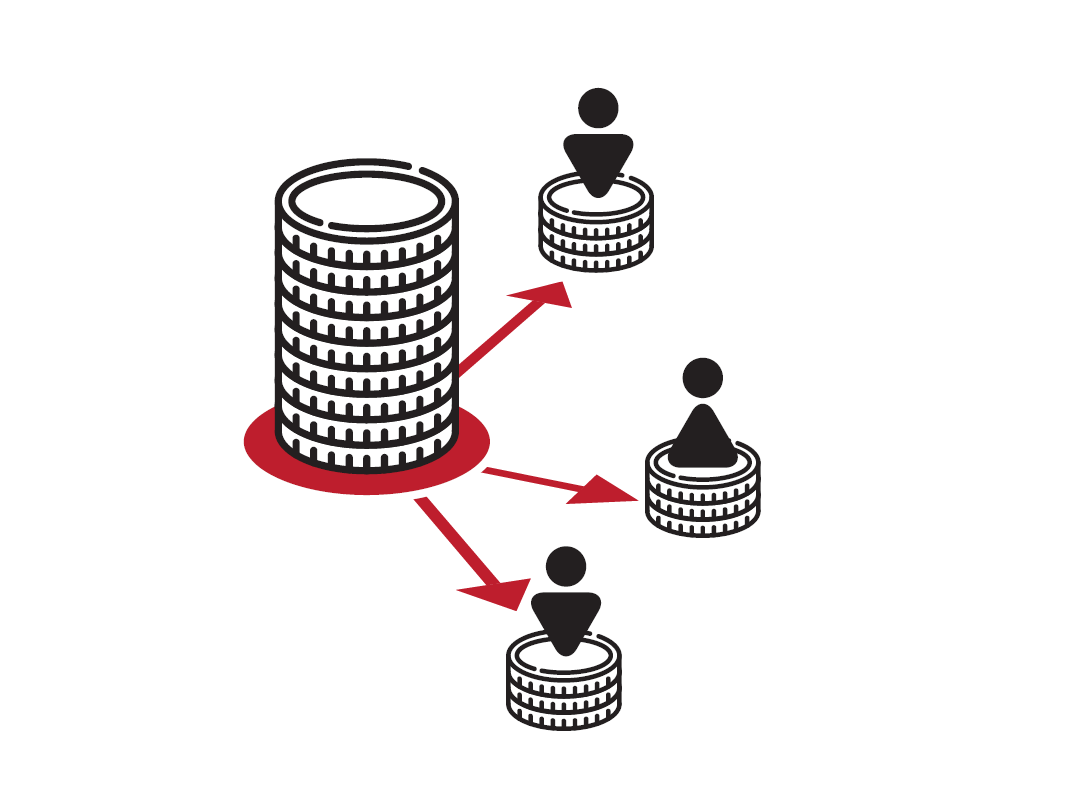 Muslim estates in Singapore are regulated under the Administration of Muslim Law Act (AMLA). Section 121 of the Act stipulates that estates belonging to Muslims domiciled in Singapore and died intestate (without will) shall be adminis- tered in accordance to Islamic law of inheritance (Faraid). Under this condition, the eligible heirs to the estates and their shares would depend on the inheritance certificate issued by the Syariah Court of Singapore.

The exact share of each heir varies depending on the actual composition of heirs. After the fraction of shares for heirs has been allocated, the balance will be distributed among the children where sons would be given double the share of daughters. For example, if the balance is SGD100,000 and the deceased leaves behind one son and three daughters, it would be divided into five shares; the son would inherit SGD40,000 (2 shares) and each daughter would inherit SGD20,000 (1 share each).

This situation has become an issue among parents who wish to distribute the estate to their children equally – is this permissible under the shari’ah or does the shari’ah provide a solution to the issue?

This article seeks to provide a positive answer to the question and the way it could be done in accordance with the shari’ah, without being prejudiced against Muslims who choose the Faraid option. This article is premised on the opinion that allocating equal share of estates among children, regardless of gender, is permissible as long as it is done through proper instruments and meet the necessary conditions approved by the shari’ah. Also, there is no evidence (dalil) that explicitly prohibits such practice.

MISUNDERSTANDING OF ISLAMIC INHERITANCE LAW
The first misunderstanding is the idea that the law of Faraid is the only way of distributing Muslim’s estate.

The truth is that Faraid is not the only way in the shari’ah for Muslims to administer their estate. The shari’ah provides many other instruments such as hibah (gift) and waqf (endowment) for the purpose of estate distribution. Each could be utilised individually or by combination with Faraid, as long as it meets the conditions of each instrument.

Faraid is the default way of estate distribution when a Muslim dies without a will that stipulates the use of other instruments so as to prevent conflict among eligible heirs and to ensure justice for all.

This is also the position that could be implied from AMLA that stipulates that the distribution of a Muslim’s estate has to be in accordance with “Muslim law”, which carries a wider meaning than Faraid.

The second misunderstanding is that Muslims are not allowed to deviate from the fraction that has been stipulated by Faraid for each heir’s share. This is based on the understanding that allocated fractions have been fixed in the Quran and by the Prophet (peace be upon him), and Man has no power to adjust them according to situations or their wishes. To do so is equal to changing God’s law. Also, what has been stipulated by Faraid is definitely just because it is decreed by Allah who is Most Just, Knowledgeable and Wise. None is more knowledgeable than Allah Ta’ala on what is good and just for Man. Thus, Muslims are expected to surrender and obey only Allah’s decree on the matter. There is no need to think and consider other possible options, except when a Muslim is considering part of his estate to be disbursed to parties who are not the eligible heirs by way of will.

The truth is Islam empowers Man with multiple options for estate planning, be it for eligible heirs or others.

This can be seen from various instruments other than Faraid in fiqh traditions for the purpose of estate distribution. In fact, Islam encourages Muslims to have an active attitude, not passive, in matters of estate planning, to ensure that justice, being an important objective of the shari’ah, is fulfilled for all relevant parties.

This can be deduced from the fact that Islam encourages Muslims to ensure that they leave behind a will before death and to always renew it in accordance to situations because, in the absence of such a will, Faraid would be the default instrument. However, this may not provide the best result for a specific situation.

CASE EXAMPLE
An example is a Muslim father who has three children. One of them is a daughter with Down’s Syndrome and the other two sons are a lawyer and an accountant.

Both sons are successful career persons and are thus, living comfortably. In view of this, the father intends to leave behind for the daughter a greater share of his estate than what the Faraid stipulates to secure her welfare and so that she would not become a financial burden to other family members.

Such an intention is noble and a rational thing to do. It should also not be misconstrued as a challenge to divine law or a doubt on divine wisdom in the shari’ah. While Muslims must believe that in general all divine laws are just and good for Man, reality informs that a law may not result in the best outcome when applied to a specific context. It is for this reason that the shari’ah also provides and allows for rukhsah (deviation from original rule) as exceptions in order to accommodate to special situations such as the above.

The father in the above scenario may consider steps that will be illustrated below.

Step 1: By consent of all eligible heirs
Muslim estates can be disbursed to all children equally when all eligible heirs consent to the arrangement, despite the stipulation in the inheritance certificate issued by the Syariah Court.

This has been mentioned in a fatwa by the Fatwa Committee published in Kumpulan Fatwa 3 in 1998. The fatwa states that the distribution of Muslim estate must be done in accordance to Faraid. Each eligible heir must know his rightful share. However, it is permissible to distribute the estate equally to all the heirs provided they voluntarily agree on such an agreement (Question 50, p. 33).

Although the fatwa clearly allows for equal share for all children, it could also be used for allowing greater share for the daughter with special needs based on the spirit of the example shown above.

This is the best approach for the above scenario because it is decided consultatively and with mutual consent of all eligible heirs in order to waive the Faraid stipulation.

This could be achieved in two ways:

Firstly, the father should secure consent of all eligible heirs before writing his will. While writing the will, the father may include the consent of the heirs as proof in the future. A lawyer’s advice is necessary to draft the will that would bind all parties.

Secondly, the father may not leave behind a will but the eligible heirs themselves decide to waive the Faraid stipulation and mutually agree on equal shares.

If an heir could not agree with an alternative arrangement to the Faraid stipulation, he cannot be forced to waive his rightful share in the inheritance certificate. His share should be deducted from the share and the balance could be distributed in accordance to any arrangement agreed upon by other heirs.

In a situation where a consultation cannot produce a consensual arrangement for the estate distribution, the father could then consider the steps below.

Step 2: By wasiyat nazariyah
Wasiyat nazariyah is a will that contains a nazar (vow) on the part of the testator that he bequeaths his estate to all his children on equal shares effectively from three days or an hour before his death.

Wasiyat nazariyah is valid as stipulated in a fatwa in Kumpulan Fatwa 3 (Question 42 – 44, pp. 28-9). Its application could also be seen in a fatwa on joint tenancy property issued in 2008.

However, a caution must be made to any Muslim who wishes to use this instrument because of the Singapore High Court’s decision in Mohamed Ismail bin Ibrahim and others vs Mohammad Taha bin Ibrahim (2004, 4 SLR 756-783). In this case, the court ruled that wasiyat nazariyah is void and could not be executed when it was challenged by an heir who argued that the contested estate should be distributed in accordance with the inheritance certificate issued by the Syariah Court.

Thus, the use of this instrument is risky when there is a potential that it may be challenged in court by any aggrieved party.

Advice from asatizah and lawyer is therefore needed in drafting wasiyat nazariyah to ensure that it fulfils the necessary conditions in the shari’ah and law.

Otherwise, the next step could be another option.

Step 3: By hibah ruqba
Hibah ruqba is a gift that is executed via a will. A testator can stipulate in the will that he is giving his estates to all his children equally upon his death. However, the ownership of the gifted estate/share will return to the testator if any of the receivers dies before him and, thus, it could not be distributed as an estate to the deceased’s heirs.

It must be cautioned that the use of this instrument is not risk-free from legal challenge in the court on the basis that it contradicts the inheritance certificate’s stipulation. However, there is no precedent binding yet that rules hibah ruqba is legally void, unlike wasiyat nazariyah.

Thus, it is advised that consultation with asatizah and lawyer is critical to ensure the validity of the will under the shari’ah and law.

CLOSING REMARK
The article has been focusing on an equal share of estate for Muslim children when there is a mixture of sons and daughter.

The steps could also be used for distributing estate to non-eligible heirs such as adopted children, children born out of wedlock or other parties (i.e. charitable organisations or endowments).

This article began by stating that the use of instruments as an alternative to Faraid stipulation is not prejudiced to the intention of a person who wishes to utilise them. Admittedly, the instruments could also be used for unscrupulous purposes such as to unjustly favour an heir above the rest and to cause injustices to others. For this reason, the article would close with a reminder that any person who wishes to utilise the mentioned instruments in order to deviate from Faraid stipulation should only do it with pure intentions and to be conscious that Allah is All-Knowing. To Him, we shall all return and be accountable for every single deed we make in this life.

Prudence therefore, needs to be exercised. This requires the seeking of advice from learned asatizah with experiences in estate planning and lawyers in order to provide the necessary checks and balances before the final decision is made. ⬛