Every night, the sun goes down on Singaporeans who have not had enough to eat, or who do not know where their next meal is coming from. Surprised? As Singapore has shifted from Third World to First, the nation has shaken off the widespread hunger and food insecurity that prevailed at independence. Yet, this “developing world” version of widespread hunger and endemic deprivation has been replaced by a very first-world problem: hunger and food insecurity afflicting individuals or pockets of neighbourhoods, even in one of the world’s wealthiest nations.

If you are surprised that hunger and food insecurity are pervasive enough in Singapore to write about, we were too. To be sure, in researching a series of vulnerable communities in Singapore with the Change Lab of the Lien Centre for Social Innovation (LCSI) at the Singapore Management University (SMU), we expected to find poverty. After all, based on a back-of-the-envelope calculation, LCSI’s then-director, Jacqueline Loh, found that between 12 and 14 percent of Singaporean citizens and permanent residents were poor. Former GIC economist Yeoh Lam Keong, using somewhat different methods, calculated a similar number of between 10 and 12 percent (see the LCSI Report, Smith et al 2015, pp. 14-15).

These figures are relatively low compared to those in other countries; still, it is startling to reflect that this means experts estimate between one in ten and one in seven Singaporeans live on an income below what is needed to secure basic necessities. We needed to follow up to find out who was poor, and why. We knew that the poor are a diverse group and that poverty itself can manifest in many different ways. So rather than studying “poverty” or “the poor” per se, we focused one by one on vulnerable communities in Singapore, including the low-income elderly, people with disabilities, and single-parent.

What we found was that people were not just struggling, but that incidents of actual hunger and food insecurity were not infrequent. In our research on vulnerable communities, we found people straining – and sometimes failing – to put food on the table. These groups of Singaporeans included single parents forced into debt – forgoing paying rent and utilities, and sacrificing sufficient food for themselves – so that their children might have enough to eat. They included elderly people who went to bed early to avoid the pain of an empty stomach. They included people with serious disabilities who had formerly depended on parents who were now aging, sick, and no longer able to provide. The way this food insecurity manifested itself was as diverse as the poor themselves. Through no fault of their own, they had fallen through the cracks of Singapore’s web of social services. Many more were not immediately hungry, but were “food insecure,” – not knowing where their next meal was coming from or having to skip meals or stand in food lines to ensure they had enough to eat.

Given this surprising amount of food insecurity that we were discovering among the low-income elderly, people with disabilities, and single parents in Singapore, we decided to focus our research on food insecurity itself – trying to understand the problem, and figuring out additional ways to address it. We surveyed people living in low-income areas – a total of 296 households, all with at least one Singaporean citizen[1]. Our survey was based on an internationally normed survey of food insecurity, but modified slightly for Singapore’s context. The questions asked about specific aspects of food security. In the past year, had the family worried about food? Had they ever run out of food? Had they skipped meals for lack of funds? Had they ever gone a whole day without eating due to lack of economic resources? The questions were carefully worded so as to identify people who were missing meals not to lose weight or for religious reasons, but because of a lack of economic resources. We followed up these initial questions with about 100 intensive interviews with members of the surveyed households, both food secure and food insecure. For this phase of the project, we broadened our measure of food insecurity by asking questions not just about insufficient quantities of food, but also about lack of access to nutritious or culturally relevant food. We are still analysing the data, but we present some of our findings here.

It is important to remember that we were not attempting to get a snapshot of Singapore, but to focus on a rich variety of low-income Singaporeans to try to understand the various ways that these people managed to attain sufficient food. The numbers we came up with cannot be said to represent Singapore as a whole. Our sample was not random: we focused on lower-income areas of Singapore, spending time in specific places where we knew poorer people congregated – including near places that helped to distribute food – and door-knocking on rental flats and interviewing people living in these areas. Ultimately, although our method may have left out people who could not answer the door or who had not come out to the areas where we were, we knew we would still be overestimating the problem through this method. However, that still met our purpose: understanding in a more nuanced way the root causes of food insecurity – the better to suggest interventions to non-governmental organisations (NGOs), government officials, and others who are concerned about poverty in general.

Still, despite our far-from-representative sample, we were surprised by our results. We were gratified that about 47 percent said “no” to every question on food insecurity, as can be seen in Table 1. But we were sobered by the fact that more than 50 percent of our sample of 296 answered “yes” to at least one of our seven questions. We classified the remainder of responses based on their severity: about six percent reported worrying about food, but answered “no” to the remaining questions, while about 11 percent reported eating less food or a monotonous range of food due to lack of resources. A further 36 percent were food insecure based on the survey.

Our results reveal that food poverty can be found among the old and young. It does not exempt any race or religion or gender. Even those with employed members of the family, those living in larger flats, and those with higher levels of education were not exempt. Yet in spite of this range of experiences, some clear patterns emerged. With regard to educational level: the nine households we surveyed with at least one university graduate were all food secure, while only 14 of our 21 households (67 percent) with an equivalent of a polytechnic diploma, and only 11 of our 20 households (55 percent) with the equivalent of a vocational diploma were food secure. These proportions are similar to those at the other end of the education spectrum as well: among the 43 families with at most a primary school education, 25 (58 percent) were food secure. In terms of household composition: of the 21 households with only one adult and with at least one child (not necessarily a single parent, but someone who is parenting alone), nine were secure, while nine were at the other end of the scale, classified as insecure. As for the factor of race: whereas nearly two-thirds (62.1 percent) of Chinese we surveyed were food secure, less than one-third (32.8 percent) of the Malays were (see Table 2). 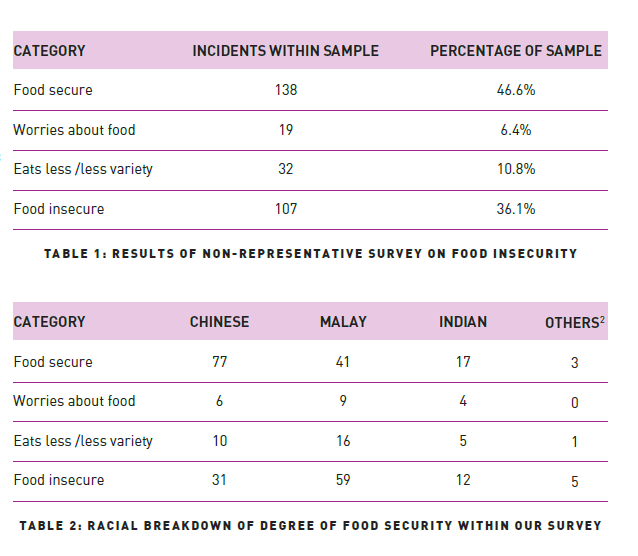 Food insecurity is also linked to household size, but in a nuanced way. The food insecure families were slightly larger (averaging 3.23 people) than that of the food secure (2.84 people on average). But the differences are pretty close. This makes sense: after all, counted in the ranks of the food insecure are large families with too few bread winners, as well as small families – including some elderly people living alone (10 of the 29 such people in our survey were insecure) as well as single adults with at least one child (only nine of 21 were food secure). What made a bigger difference was the dependency ratio – the number of adults compared to the number of children. Indeed, the dependency ratio among the food secure was less than half that of the food insecure households[3].

Work status helps enhance food security, but even full-time employment is no guarantee. Among the 82 households with at least one member with full-time employment, some 48 (59.5 percent) were food secure, while nearly one third (33 percent) were insecure. On the other end, of the 75 families whose breadwinners were unemployed (as opposed to retired), 28 (45 percent) were considered food insecure. The length of time being unemployed mattered quite a bit, but not in the way that we might expect. Nearly 60 percent of those who stated they had been unemployed less than six months were food insecure, whereas less than 40 percent of their counterparts with longer stints of unemployment were food insecure. Could it be that the longer-term unemployed have already established a safety net?

On the surface, the fact that only one in nine of our retirees are food insecure is impressive. However, in Singapore, most elderly people who cannot afford to retire will continue to work if they can. Those who need to work but can’t may list themselves as unemployed rather than retired. This applied to eight of our 29 elderly people living alone – and such a categorisation may contribute to an overly optimistic view of food security for those of retirement age.

Living in a one-room flat is the widely used ‘rule-of-thumb’ for poverty – yet this simple measure has also been criticised as being biased against those with larger families, which Malay families tend to have, on average. Not surprisingly, only 60 of our 145 households (41 percent) living in one-room-flats were food secure, and nearly the same number, 58 households (40 percent) were insecure. At the same time, of the 90 families we surveyed living in a three-room flat or larger, only 59 (64 percent) were food secure, whereas 18 (20 percent) were food insecure.

Are these preliminary results surprising? In many ways, they should not be. After all, Singapore is a large cosmopolitan city. While much has been done to combat poverty and food insecurity, it is not surprising that Singapore, like every other city in the world, contains a not insignificant number of people for whom sufficient food is far from assured.

What makes Singapore unique is not that it is home to some people who are food insecure, but rather the impression people sometimes have that the nation has no poor people, much less people who struggle to ensure adequate access to food.

Despite the efforts of the government, voluntary welfare organisations (VWOs), friends, family, good neighbours, and countless selfless volunteers, many Singaporeans still face food insecurity. And given Singapore’s size, it is unlikely that anyone in Singapore lives far from at least one person going to bed hungry. For that reason alone, we must redouble our efforts to understand and combat this scourge. ⬛

1 This is an extension of Lien’s first report on food insecurity, which was published this year (Glendinning and Shee 2018).
2 The “Others” category is broader than that normally used in Singapore and includes more people than just Eurasians.
3 Dependency ratio often includes elderly people as dependent. However, given how many elderly in Singapore remain economically active – and often contribute to households in ways other than generating income (such as childcare) – we only included children

Assoc Prof John Donaldson is Associate Professor of Political Science at Singapore Management University.
Pearlyn Neo has been accepted to the Fulbright Student Program and will be starting graduate school in the Fall.