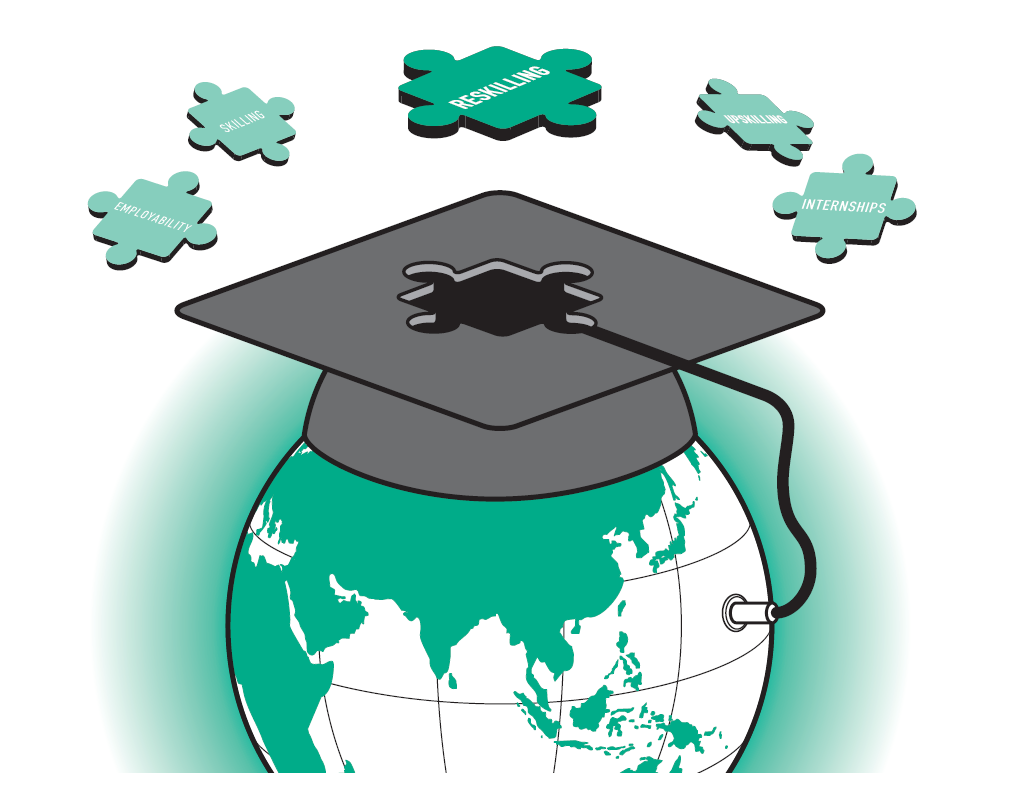 Amid news of the threat posed by COVID-19 to an already ailing global economy plagued by the US-China trade war and deglobalisation, the announcements made by Deputy Prime Minister and Finance Minister Heng Swee Keat when he delivered the Budget 2020 speech on February 18 brought a ray of hope to workers as the outlook for jobs in the near future looked bleak. Mr Heng reiterated the government’s promise that, regardless of one’s starting point, as long as one is willing to learn, the government will support one’s pursuit of lifelong learning and employability.

Speaking of the state of global economy recently, International Monetary Fund (IMF) chief Kristalina Georgieva said, “The truth is that uncertainty is becoming the new normal”. By extension, this uncertainty applies to jobs as well – how long they will be around before becoming redundant or displaced by technology and, for that matter, how long the skills one possesses will remain relevant so as to continue to make one employable.

The days of the iron rice bowl are effectively over. Widespread technological disruption in many traditional industries, for instance, has made determining where one can find job security or build a long-term career a gamble. Many jobs, including higher-skilled ones, are now substitutable with state-of-the-art technology such as artificial intelligence (AI).

In Singapore, according to the Ministry of Manpower (MOM)’s convention, workers are classified into three broad categories: professionals, managers, executives and technicians (PMETs); clerical, sales and service workers (CSSWs); and production and transport operators, cleaners and labourers (PTOCLs). Each of these groups faces a different set of challenges. The PMET group is represented by more of those from institutes of higher learning (IHLs)[1]. than others but it is possible for graduates of IHLs, especially those from Institute of Technical Education (ITE), to have significant presence in CSSW and PTOCL positions.

In his Budget 2020 speech, Mr Heng shared that graduates of IHLs are enjoying high employment rates and increased starting salaries because IHLs and the industry align their distinct roles to keep learning relevant so that “students can secure good jobs”. This assertion, however, needs a little more unpacking.

Channel NewsAsia reported last year (June 18, 2019) that fresh graduates are adjusting their job expectations and are embracing short-term contracts as companies became increasingly cautious in their outlook. According to MOM’s 2019 Advance Release of Labour Force in Singapore:

Among the age groups, young residents aged 25 to 29 and those in their 50s posted larger increases in incidence of fixed-term contract employees.”

A possible problem with short-term contracts of at least one year is that it makes it harder to place oneself firmly on a linear career progression because there is no assurance that, given the uncertain outlook, the next job will be in a similar field. Subsequent employer hiring on contract may also not offer the applicant a salary higher than his or her last drawn one or may have worked out its own remuneration for contract work although the applicant has acquired skills and work experience.

Companies do, however, offer permanent positions to those who were initially hired on contract based on their performance provided their long-term plan justifies the headcount and they are able to bear the cost of the benefits that come with a full-time permanent position.

POLYTECHNIC AND ITE GRADUATES
In contrast with university graduates, the figures for post-National Service (NS)[4] polytechnic and ITE graduates warrant a more serious reflection. One may recall the recommendations made by the committee for Applied Study in Polytechnics and ITE Review (ASPIRE) in August 2014. The overall objective of the review was to secure better outcomes and opportunities for polytechnic and ITE graduates.

Among the recommendations are the initiatives to strengthen linkages with industry; increase NITEC to Higher NITEC progression opportunities so ITE students can deepen their skills; develop sector-specific skills frameworks and career progression pathways in collaboration with industry to support progression based on industry-relevant skills; and enhance internships.

Industries are constantly evolving and it will take time to mobilise industry players, educational institutions, workers, unions, students, parents and educators to work together to achieve better outcomes for polytechnic and ITE students. In the meantime, full-time permanent employment within six months of graduation has been declining for both post-NS polytechnic and ITE graduates.

Over the same 10-year period, the proportion of those working part–time, temporary or freelance for post-NS polytechnic students rose from 11.8% in 2008 to 24.8% in 2018. Similar figures for post-NS ITE graduates are 14.4% and 25.5% respectively. Thus, a quarter of them are without a permanent job in 2018 and this is compounded by the fact that full-time permanent positions include contracts of at least one year.

Lumping contract jobs with permanent (non-contract) ones can be problematic because the former does not offer the same degree of certainty as the latter.

IS THERE CAUSE FOR CONCERN?
A number of programmes have been rolled out over the last decade to make graduates more employable by nurturing core skills and competencies – such as the Singapore-Industry Scholarship scheme, established in 2012, which Mr Heng mentioned in his Budget 2020 speech; and the recommendations made by the ASPIRE committee which Mr Heng, who incidentally was the Education Minister in 2014, said the government will accept in full albeit needing time to implement.

The declining rate of employment within six months of graduation among graduates of IHLs cannot as yet fully reflect the effectiveness of the initiatives as they will take time to come to fruition amid a global economy fraught with trade disputes, deepening political polarisation, inward-looking policies and increasing scepticism over the benefits of multilateralism. Singapore’s job market mirrors that of a country in the throes of economic recession and possibly needing a major restructuring. Professor Emerita at the Stephen M. Ross School of Business Linda Lim argued that “Singapore’s state-directed, multinational-led, export- oriented development model has become obsolete”. Prime Minister Lee Hsien Loong went the furthest in this regard when he said Singapore will never be done with economic restructuring. The economic gloom is further aggravated by the rapid spread of COVID-19 which wiped $50 billion off global exports in February 2020 alone. With such an outlook, employers are more inclined to roll out short-term contracts and outsource work to independent workers to weather the downturn. They may also see the benefit of continuing with such an approach in the post-recession era and as the gig economy expands. If this is the case, the proportion of those landing permanent jobs, excluding contracts, within the first six months of graduation may continue to decline well into the future.

In the case of post-NS polytechnic and ITE graduates, the proportion of those doing part-time, temporary or freelance work rose from 11.8% to 24.8% and from 14.4% to 25.5% respectively between 2008 and 2018. Add those on contracts of at least one year to this and the picture is quite stark.

The last eight years saw freelance opportunities growing severalfold with the likes of Uber and Foodpanda first entering the ride-hailing and food delivery markets, which are appealing to many polytechnic and ITE graduates as they could potentially find a source of income relatively quickly and earn more than what they otherwise would in full-time permanent employment. Based on the Singapore Census of Population 2010, there were 122, 341 own account workers who usually worked at least 35 hours per week[5]. By 2017, the figure for primary own account workers swelled to 190,900 according to MOM’s report on Own Account Workers, 2017.

For polytechnic and ITE graduates benefitting from the initiatives for IHLs, they will remain on course for PMET positions as they develop their careers. However, for those who have had a more ‘rocky’ start – settling for part-time work or lower-skilled freelance work – there is a risk that they may fall into and find it hard to progress beyond the CSSW or PTOCL categories. The longer they remain in these jobs, the higher the risk of remaining there in the long run.

SURVIVING THE FUTURE
Budget 2020 announced further opportunities for graduates of IHLs with pre-employment education and continuing education goodies. A new Asia-Ready Exposure Programme will be introduced to support local youths’ visits to cities in ASEAN, China or India so that their employment prospects will transcend cultures and countries. In addition to this, support for internships under the Global Ready Talent Programme will also be enhanced. The Government will also invest in the Next Bound of SkillsFuture for those already in the workforce.

These schemes, notwithstanding, many graduates of IHLs will take longer to find their footing in a job market where economic restructuring is a constant.Settling for term contracts, part-time and freelance work will grow in prevalence. Skilling, upskilling and reskilling are the only way to sustain employability in “the new normal” to negotiate the uncertain job market terrains.

The government should continue to expand the range of opportunities available to IHL graduates by bringing more and diverse industry partners on board. It should also ensure the continuing education and training programmes are continuously refreshed not only to remain relevant but also to generate interest. At the same time, there are other interventions the government can look into, such as helping the IHL graduates who have been working for, say, more than a year in jobs that do not build their employability over time.

Lower-skilled freelance work, for example, may attract IHL graduates, particularly ITE ones, with better pay in the immediate term but, by the time the need for a full-time job arises, they may find themselves having spent too long freelancing and are thus not eligible for many entry-level positions designed for fresh graduates.

Apart from merely creating jobs, the future economy calls for nurturing an enterprising attitude in students so as to encourage them to go into entrepreneurship after graduation or while still a student. This drive should be augmented with support in linking budding entrepreneurs with a network of support and safety nets for those whose enterprise fails so that risk-taking is not shunned. ⬛

1 The IHLs include the three Institute of Technical Education (ITE) colleges, Nanyang Polytechnic (NYP), Nanyang Technological University (NTU), National Institute of Education (NIE), National University of Singapore (NUS), Ngee Ann Polytechnic (NP), Republic Polytechnic (RP), Singapore Management University (SMU), Singapore University of Technology and Design (SUTD), Singapore Institute of Technology (SIT), Singapore University of Social Sciences (SUSS), Singapore Polytechnic (SP) and Temasek Polytechnic (TP).
2 Full-time permanent employment refers to employment of at least 35 hours a week and where the employment is not temporary. It includes those on contracts of one year or more. Before 2009, full-time employment refers to employment where normal hours of work is 30 hours or more.
3 All data on employment of graduates from IHLs are from the Ministry of Manpower’s Statistics on Employment Outcome of Graduates from Higher Learning, 2008 – 2018. Retrieved from https://stats.mom.gov.sg/pages/graduate-starting-salary-tables2018.aspx.
4 Post-NS graduates refer to male graduates who had completed their studies about two years earlier. For example, 2018 data refers to male graduates who completed their full-time NS between April 2017 and March 2018 for polytechnic and ITE graduates.
5 Working 35 hours per week is consistent with the definition of full-time permanent employment. The Singapore Census of Population 2010 does not provide the breakdown of own account workers according to primary and secondary ones like MOM’s Report on Own Account Workers, 2017.