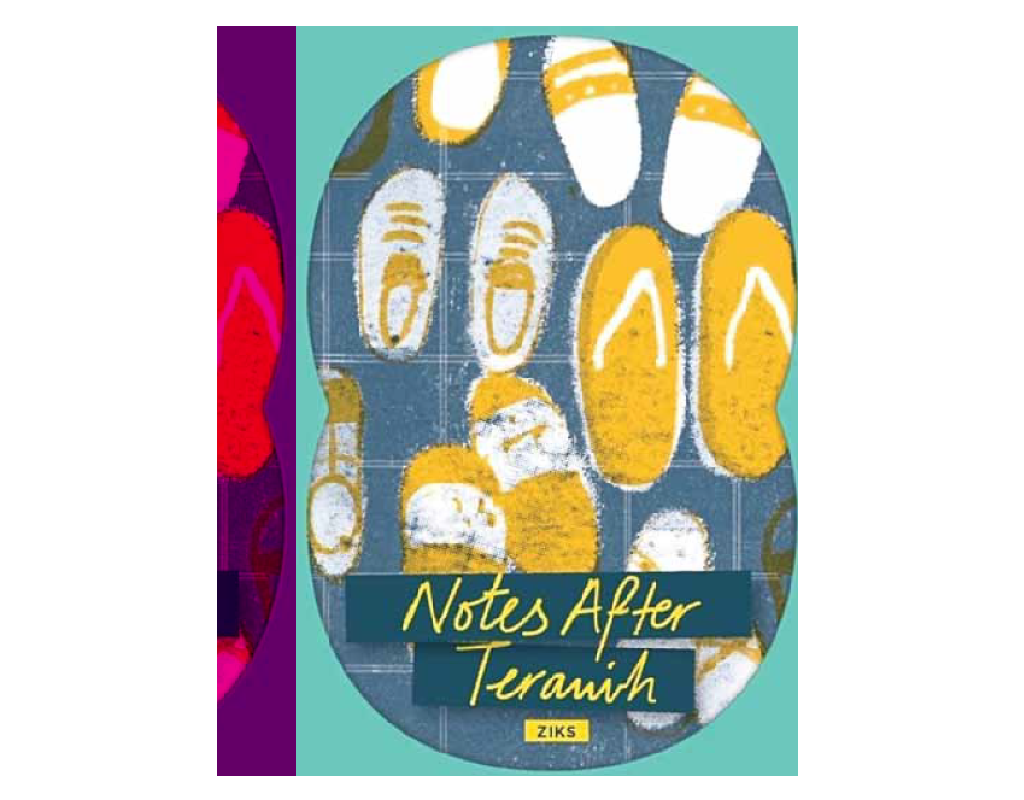 Notes After Terawih is a compilation of word sketches by Ziks. Her writings and sketches were based on her observation during her terawih prayers done in a single mosque. After deciding to perform her terawih prayers consistently one year, she recalls her experiences by documenting them on her phone before publishing them into a book.

The cover of the book instantly catches your attention – a simple drawing of shoes and slippers mimics a familiar sight outside the entrance of any mosque during Friday and Eid prayers. That sense of familiarity upon seeing the cover of the book is also captured in her stories. The stories that Ziks narrates in her book are those that we would have either experienced ourselves, or have heard from our family members and friends at some point. It’s an insight into the Muslim community here in Singapore, in particular during the holy month of Ramadan.

STORIES OF THE EVERYDAY MUSLIM
In Notes After Terawih, Ziks shares her various experiences that would make a reader recall their own experience during terawih. It takes away the usual religious narratives but focuses on the human element of terawih. It highlights the time of the year where the Muslim community would gather, each member with his or her own colourful characteristics and quirks waiting to be told. It is the story of the everyday Singaporean Muslim, all gathered in congregation to worship their creator.

Ziks writes about the nenek who lent her a brooch while she was feeling insecure about her scarf. She describes the comfort given by the old lady who leaned in closer and put her arm around her to hear better as a “comfort only neneks can give”, and instantly one can imagine the warmth of the grandmother, who eventually gave Ziks the brooch to keep. The reader would also feel the same warmth as Ziks tells her observation of a girl dressed in white who hugged her mother before declaring that her mother was the best mother in the world.

But beyond that, some of her stories also remind us how the month is personal and spiritual to many – that it is a month many use to build a closer connection to God. The month, while filled with joy and happiness, is also filled with a sense of heaviness, especially for those seeking healing in silence. She writes in her experience meeting a woman who was there for prayers as well:

“Her eyes were wet, and she was in no way the composed person she was when she entered the room…” (p. 21)

And in another story, she narrates of another worshiper,

Those short stories remind readers that regardless of age and gender, everyone comes to their creator with their own stories and carry their own silent heaviness in their hearts.

There are still more stories that would make readers realise how personal religion can be. Ziks shares her encounter where she saw a man who looked familiar – it turns out the man in songkok and baju kurung was the same man who had once dressed up as sleazy fireman for a costume party. Many of us in the community would assume religion is absolute – that someone who still believes in the faith has to dress a certain way or carry himself or herself a certain way but often, we are wrong and that we don’t know what is in a person’s heart.

Her shared experiences go beyond just the terawih prayers. Writing about the culture of exchanging food with neighbours during Ramadan, she shares how, much to the annoyance of her father, she identifies her neighbours not by their names, but the flat level they were staying at – “Tingkat 6” (sixth storey) for example, before finding out that a little boy calls her “Tingkat 7” (seventh storey). Such stories would make the reader chuckle, and again would be a familiar experience to some of us, especially for those who live in HDB flats – neighbours are a common sight but how many of us actually know their names?

CONCLUSION
While Notes After Terawih served as a nice collection of short writings that will make readers reminisce on their Ramadan, more could be explored in her stories. There were many stories that would leave readers with more questions than answers. There were times after reading a story I found myself wondering if that was especially, but this is not explored as much as it could be. Reading it makes me question if that’s the state of the community and if so, why, but readers would unfortunately not get the answer. Her stories often show the sense of comfort the community seeks through religion, but also shows that there might be a lack of support in the community – many times we see people crying during prayers and hoping to seek answers to God, but we are reluctant to speak to them, because of a fear that we might intrude into their personal life.

There were stories that seemed heartwarming at first, but later leads to confusion – like the story of an active little boy in the prayer section who was there with the mother. At the end, it was told that she heard the little boy call for his father once prayers ended. Why was the boy not with his father? Why do little children usually stay with their mothers during prayers, and not with the father? Stories she wrote as amusing like that isn’t uncommon, but it does make readers wonder at the issues of power and structures of hierarchy, especially in the context of gender in the community. It would have been interesting to read more of her critical perspectives in the stories she shares and the things she observes beyond mere observations and even romanticisation of prayer spaces and religion.

However, Notes after Terawih is a good attempt by a new writer. It is a nice “feel-good book” that would make readers chuckle, smile and, at times, even reflect on the state of the community. The writing is not pretentious and there is plenty of code-switching between English and Malay that would make most of us feel right at home. The stories are relatable, reflecting experiences and realities that many of us would have gone through, bringing a sense of familiarity to the reader, but at the same time, the stories linger in our minds long after the pages have been turned, and we wonder what happened to the people in Ziks’ stories long after terawih prayers are over. The writing is straightforward and it would make for a good read before the next Ramadan, helping to get us excited not only for the terawih prayers, but for the opportunity to build a sense of community during the holy month. ⬛

Mysara Aljaru is a Master’s candidate in the Department of Malay Studies in National University of Singapore. Prior to this, she was a journalist and producer with local mainstream media. Her writings have also been published in Growing Up Perempuan and Budi Kritik.