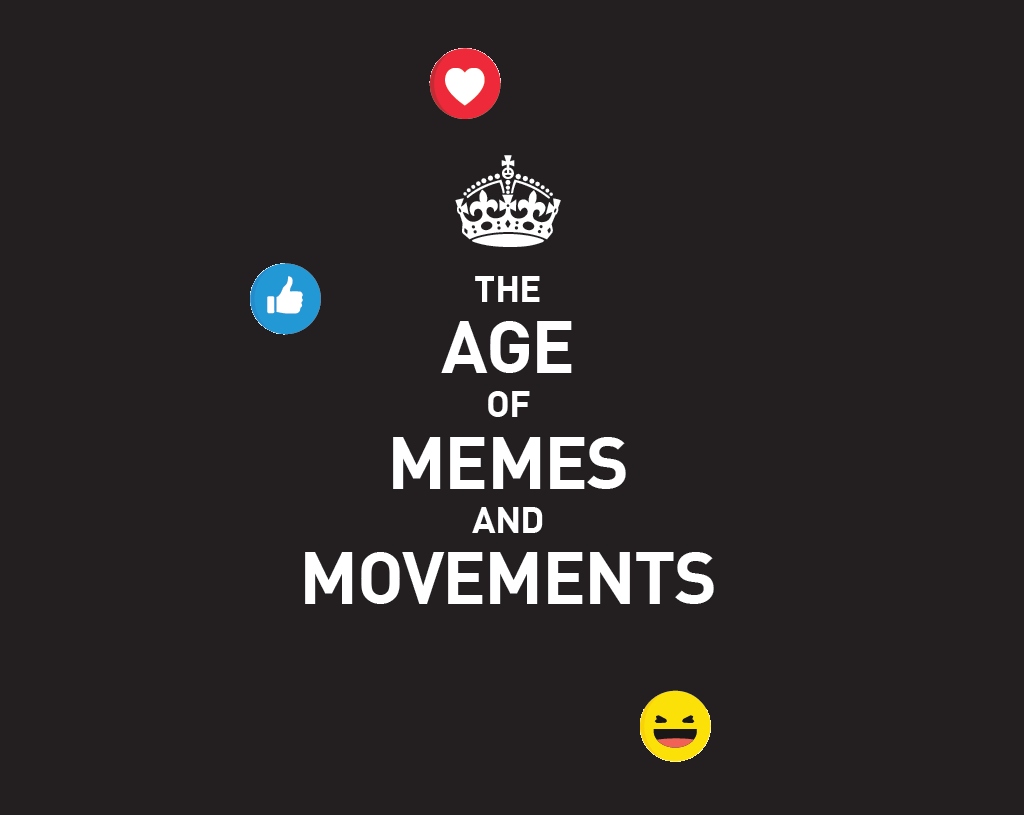 On Friday 7th February, droves of shoppers flocked to supermarkets to stockpile as DORSCON (Disease Outbreak Response System Condition) on COVID-19 (Corona- virus Disease 2019) in Singapore was raised from yellow to orange. Within hours, toilet paper, rice, instant noodles, canned food, masks and hand sanitisers ran out of stock. Even condoms ran out of stock.

As a result, hilariously scathing online response flooded social media. Netizens on Twitter, Instagram, YouTube and Facebook (perhaps Tumblr too) freely created memes as a reaction to the poor behaviour of shoppers. These memes expressed exasperation at all things related to COVID-19, including the chaotic imagery of panic-buying. In March, as the pandemic spread worldwide, similar patterns of behaviour and memes were observed.

But this is not just about the pandemic. This is about how digital natives have created a new norm in shaping minds and sparking movements by responding to social and political issues in this digital age. Besides being a rallying point for millennial humour around the world, memes have become a part of the internet culture. They have proven their efficiency to affect change in political, social and economic domains. And the internet, that consists of online news sites, social media and personal communication platforms, is the mainstay of people’s information diet[1].

HOW MEMES WORK
Creators create original memes, which can be in the form of an image, video, GIF, or text. Meme creators are typically millennials and Gen Z. These memes are posted on social media like Facebook, or through a news media website like Mothership.sg, a meme page like 9GAG, a meme account like Singapore Laughs or through one’s own social media account. In recent years, meme factories have emerged out of the increasing demand for production, submission, and collection, guided by the level of engagement of internet users.

These factories utilise the art and science behind memes that relate to a variety of demographic and transform them into a saleable commodity[2]. In other words community meme accounts are stakeholders of the meme industry and can gain profit.

High-quality memes typically garner high and meaningful engagements or gain virality due to their shareable, relevant and emotional content that triggers feelings of joy, anger or nostalgia. These memes appear at the top of the feed thanks to the churning waves of the algorithm.

MEMES REFLECT PUBLIC OPINION
Meme culture, namely the creation and distribution of memes, has become the mainstay of the millennials’ and Gen Z’s online entertainment consumption and therefore, has become a significant platform for finding and disseminating information and feedback on issues of today. During the Singapore Perspectives Conference 2020 in January, Dr Crystal Abidin opened the session titled ‘New Forms and Movement’ by talking about the features of internet culture. She stated that memes have “contributed to the normalisation of ideas as young people are equipped with the vocabulary to discuss issues deemed contentious”. Indeed, we see how memes function not only as entertainment (like cute cats and baby Yoda memes), but also as a convenient means for the layman to give feedback either through their creation, or by upvoting such that they rise to the top of our feeds.

Memes have become a good yardstick for popular ground-sensing on the attitudes and emotions of the public. Dr Crystal Abidin cited the #WhereIsBaey? memes that mocked MP Baey Yam Keng for his tone-deaf post regarding the Paris attacks. In some cases, memes, due to their casual nature, are more accepted by the public in commenting on sensitive social and political issues than other forms of communication. Examples of these memes include those relating to how countries are handling COVID-19 (Figure 1) and a Facebook account dubbing Roti Prata as the “Asian flat croissant”. These memes, due to their virality (and possibly digital lobbying) and informal tone, remain unregulated by authorities. The juvenile nature of these memes also allows them to fly under the radar. Yet, they reflect public opinion. 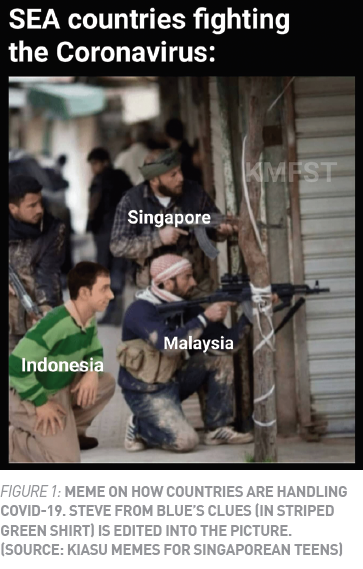 MEMES AFFECT CHANGE
While some memes function only as a vessel for public opinion, others work as loudspeakers to call for action. These memes demand attention and trigger outrage. The wave of sexual violence cases involving voyeurism and outrage of modesty in 2019 is case in point. High profile cases include the Monica Baey incident involving voyeurism, the SG Nasi Lemak Telegram group that circulated obscene materials and promoted vice activities, and Terence Yuan, the convicted molester who received a lenient sentence (Figure 2). 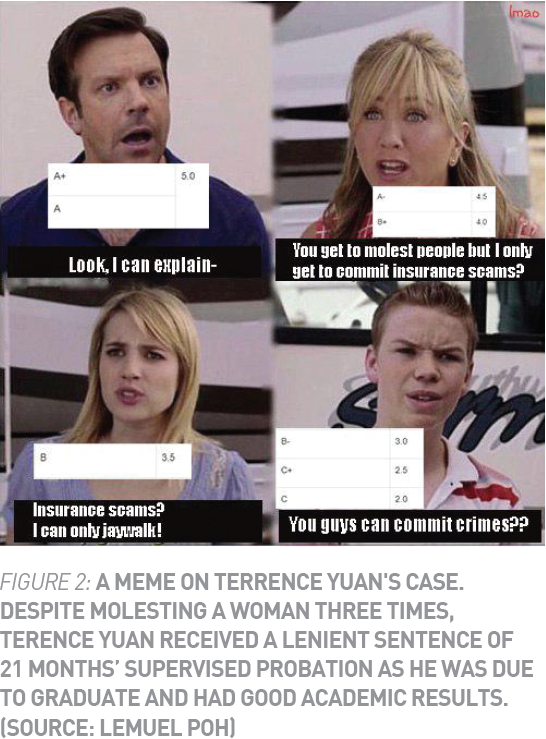 The psychological effects of emotions experienced by the public were easily amplified en masse via memes when there were no words to express the shock. The internet saw high volumes of memes and parodies being produced by netizens and influencers expressing their outrage regarding this issue and expressing their solidarity with victims. The subject of sexual harassment was popularly discussed online.

This sparked an online movement on sexual assault and the law. Hashtags like  #JusticeForMonicaBaey and #MeToo were used by thousands. Stories of netizens experiencing or witnessing sexual harassments that went unreported, and

of unpunished sex offenders, flooded online forums. This was an incredible phenomenon in itself for two reasons. Firstly, the taboo surrounding sexual assault in a conservative society does not encourage free speech on the matter. And secondly, talking about sexual harassments in a forum may harm one’s career, reputation and relationships. The ability for netizens to speak up about sexual assault may reflect towards the online community becoming a safe space to address sensitive issues.

While memes appear unrefined in its pithy and terse formats, they garner great awareness of issues, successfully exposing and destigmatising uncomfortable topics. When society learns to speak up on the topic of sexual abuse, it can empower victims and protect the vulnerable. Perhaps, memes are the key to unlocking Pandora’s box of all-things-hard-to-talk-about.

Beyond the online space, a ripple of movement was sparked among students, universities and companies. Students signed a petition to reopen Monica Baey’s case. Then, a town hall meeting in the National University of Singapore (NUS) was attended by 500 students to push for change in policies regarding sexual misconduct. NUS adopted new measures after the backlash over the Monica Baey incident that include strengthening hostel security and setting up a new unit to support sexual assault victims. Industry partners like OnHand Agragrian took action and issued a statement against the laissez faire attitudes towards sexual misconduct. Additionally, Minister for Home Affairs K Shanmugam has also

hinted that the government will look into amending the law on sexual assault. Other top universities are also rethinking their policies on sexual misconduct.

FLAWS OF MEMES
Memes have established themselves as the lingua franca of online communication and allowed for citizen participation and engagement across all socioeconomic lines. But the blind, the digitally illiterate and those without internet access remain excluded from this global internet culture. The cultural relevance, inside jokes and all, unfortunately, does not permeate these groups which limits the impact of memes beyond the digital platform.

Another dubious effect of meme culture is whether or not memes are democratic. Is every meme creator given the equal opportunity for his or her meme to make it online? Or has the algorithm been rigged by corporate and governmental forces?

Because memes have been a favoured format among the public, they have been capitalised by corporations and used by governments. Also, many curators have partnered with media organisations.

This means that memes as cultural currencies can be reduced to mere commodities for the powerful to manipulate socio-political discourse. Electoral campaigns in Brazil in 2014, the US in 2016, and India in 2019 were mired in propaganda memes. Memetic warfare has culminated in Brexit and anti-Muslim sentiments in India. However, these allegations remain speculations as currently, there is little transparency about the deep-reaching impact of memes.

Besides the political implications, brands face difficulties in building a marketing plan around memes that can be unpredictable. The brownface saga is the epitome of the chaotic nature of memes. Not only did they involve the parties behind the advertisement like Dennis Chew and Havas Media, they also involved influencers like Preetipls and her brother, Subhas Nair, who created a rap video responding to the ad. This later involved government intervention. Also, through memes, the online community uncovered racist depictions through brownface that occurred in the past involving comedy channel Wah!Banana, celebrity Desmond Tan, Chief of Singapore Sports Institute Toh Boon Yi, and UOB staff for their blackface photos. Reputation of compa- nies were affected and images of these people were then used in memes.

Individuals who are ‘meme-d’ (whose images turned into a meme) lose their privacy. ‘Meme-d’ children especially are at risk of psychological and emotional distress. These are some of the challenges that leaders have to confront in regard to the proliferation of memes today.

The meme community decides which issues are subject to the court of public opinion, which celebrities rise to fame and which companies succeed, or otherwise. In other words, memes can make or break you. This reminds me of an eerie Black Mirror episode titled ‘Hated in the Nation’ where netizens unknowingly engage in a sick game online to eliminate despicable members of society. While the episode is an exaggeration of today’s society, it is not a far stretch.

In conclusion, memes act as a ground-sensing tool. They can also be a rallying point to operationalise actions and cause a series of serendipities to occur. Yet, this rogue force wields a soft memetic power that can potentially hurt states, brands and individuals. So, let us be mindful of our online participation to ensure that our virtual actions are kind and have good repercussions. ⬛

Amanina Hidayah is a Research Assistant in the Society and Culture department at the institute of Policy Studies. She does research on ethnic minority issues, specifically on the Malay-Muslim community as well as on heritage and culture.