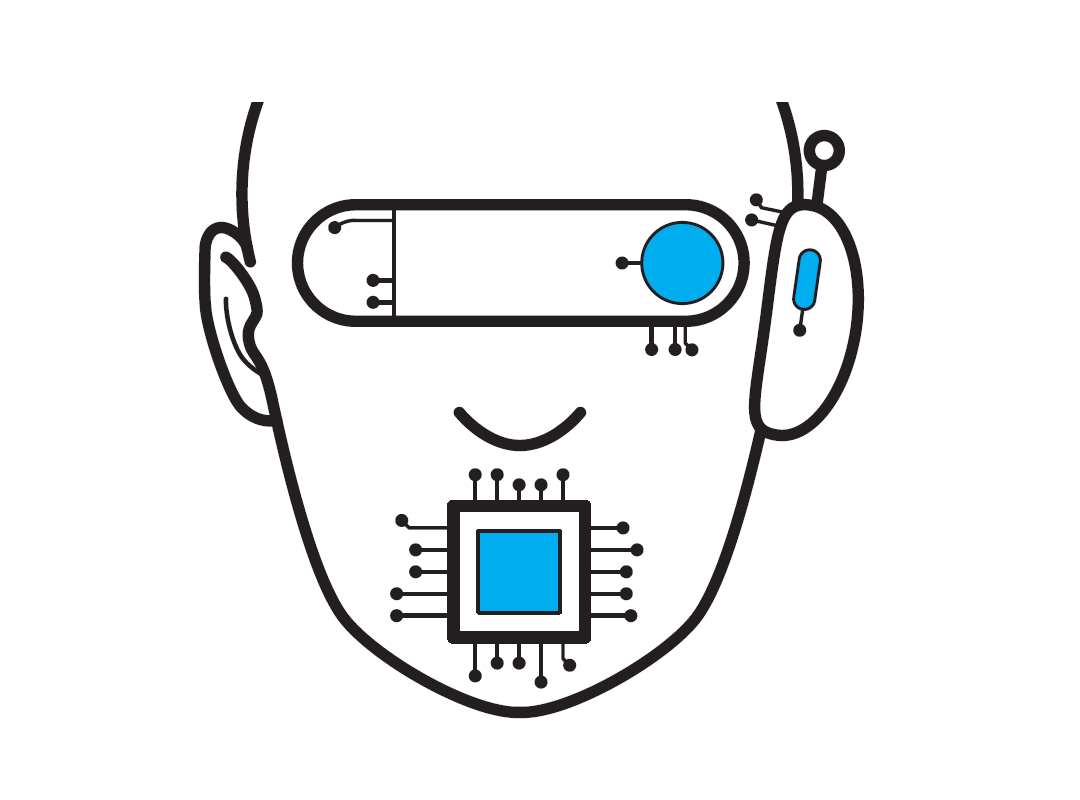 “A specter is stalking in our midst whom only a few see with clarity. It is not the old ghost of communism or fascism. It is a new specter: a completely mechanized society, devoted to maximal material output and consumption, directed by computers; and in this social process, man himself is being transformed into a part of the total machine, well fed and entertained, yet passive, unalive, and with little feeling.”
— Erich Fromm1

It was around half a century ago that German social psychologist and humanistic philosopher, Erich Fromm, sounded the alarm about the coming of a new society in which, at the dawn of the second Industrial Revolution, human thought would be replaced by the thinking of machines. Fast forward to the present day, the world is still struggling to come to terms with the Fourth Industrial Revolution which is fundamentally changing the way we think, live, learn, work and relate to one another. This latest change in society is enabled by extraordinary technological advances that are merging, and at the same time, blurring the boundaries between the physical, digital and biological worlds in ways that are unprecedented in human history2.

As with the earlier industrial revolutions, the digital revolution has brought with it both potential and risks. Many have benefitted, along with a few who have profited, from its convergence of emerging technologies such as artificial intelligence (AI), robotics, the Internet of Things (IoT), autonomous vehicles and 3D printing. Conversely, many others have been left behind as a result of its disruptive force that exacerbates pre-existing social inequalities. Across the globe, workers are at risk of losing their jobs to machines as automation replaces physical labour. In addition, the digital divide resulting from the third revolution grows wider as those early adopters of digital technology would have the means and resources to sustain and upgrade their digital lifestyle and consumption.

How should we respond to such radical change? Do we ride the wave and join the revolution, or do we adopt a critical posture and tread cautiously instead in the digital minefield? Several works published in recent years have analysed the digital era from a critical lens, bringing to light its dark side and the ‘evils’ of big tech companies. Amongst others, they include how big data algorithms are increasingly being used in ways that reinforce pre-existing inequality3; the ways tech giants exploit our personal data for their own ends, undermining personal autonomy and eroding democracy through surveillance capitalism4; how this rush to monetise and profit from data is comparable to the land grabs perpetrated by colonialists of the past5; and how the sociopathy of these powerful corporations, run by well-intentioned human beings, have made them betray their founding principles6. These books warrant us to take a step back, to challenge the dominant narrative surrounding digital transformation, and to think of how we can resist and protect ourselves from the dark side of digital technology.

The government along with tech leaders and pundits have written and spoken so much about the need for companies to transform their businesses and for workers to upskill themselves in order to stay relevant and competitive. Community leaders have called upon the community to change their mindset, to embrace digitalisation and to upgrade themselves by learning advanced skills that will make them competent users of digital technology. Children as young as five are taught how to code, while students in schools are encouraged to pursue careers in science, technology, math and engineering. Just like in the legend from the town of Hamelin, everyone is compelled to march to the tune played by the pied pipers of Silicon Valley, leaving behind those who are lame, deaf and blind to the whole fanfare. Because to do nothing in the face of change makes everyone anxious.

The idea of change being a constant in life is perhaps one that is hard, if not entirely impossible, to dispel. It could have been conceived as early as perhaps the dawn of reason itself. The 19th century German philosopher, Arthur Schopenhauer, had claimed that change alone is eternal, perpetual, and immortal, following the Greek philosopher, Heraclitus, who established that everything flows and that nothing stands still. Such austerity in observation, however, perceives change as something of a natural process; something which is given and hence, beyond human accountability.

In an organisational change, for instance, globalisation and trade liberalisation have often been referred to as the chief drivers of change and a convenient basis for mergers and acquisitions, which have led to restructurings and layoffs. As much as such change is seen as inevitable due to external pressures (globalisation, economic recession, technological advancement, etc.), the issue of accountability warrants attention. This is because, apart from those who benefit from change, there are others who suffer from it. In the case of globalisation, it has brought different things to different people. There are winners and losers, and not everyone gets to decide who wins, or who loses.

With the onslaught of digitalisation, this undemocratic way of decision-making simply gets an upgrade, especially during the COVID-19 pandemic. Within a year into the global crisis, the Zoom application has quickly turned into a verb, allowing anyone to ‘zoom’, be it for work meetings, job interviews, classroom lessons, marriage solemnisation ceremonies, family gatherings and even reunion dinners. Annual festivals, seminars and conventions, which would typically draw thousands of people onsite, have now been downsized to fit the screen of a computer or mobile device. Flexibility in working hours and workplaces has blurred the lines between private life and working life. All these happened overnight without any violent protest, at least not in Singapore.

The task ahead then is not so much of changing the mindset within the community in getting them, especially the vulnerable groups, to embrace digitalisation. Because at this juncture, every one of us has become vulnerable and at risk of losing our very humanity if we allow ourselves to be constantly coerced by digital technologies into living our lives not under circumstances of our own choosing. The more urgent task, rather, is to develop a blueprint for us and our future generations to survive the digital age. As opposed to technological planning in which the aim is ultimately to maximise efficiency, productivity and profit, what we need is humanistic planning that puts human development as the supreme principle of social organisation7. There needs to be collective resistance against a mechanised society and a collective vision towards a humanised technological society which, as defined by Erich Fromm, refers to:

“the change of the social, economic, and cultural life of our society in such a way that it stimulates and furthers the growth and aliveness of man rather than cripples it; that it activates the individual rather than making him passive and receptive; that our technological capacities serve man’s growth.” 8

To achieve this, we must make the effort to reclaim our role in the decision-making process and not leave it to digital technologies to help us choose and decide. Though it can be convenient at times, be it using Google Maps to find our way or shopping for groceries online using the Lazada app, we must be careful not to end up outsourcing the responsibility to think for ourselves, especially when it comes to making political and moral decisions.

When the positive COVID-19 cases spiked in March last year, Singapore had to undergo a circuit breaker period during which all schools were closed, and students shifted to full home-based learning (HBL) for about a month. What is rather troubling, at the same time amusing, was how it had been imagined as reflected by some of the posts from parents on social media: our children having to sit in front of the computer screens for the entire day, every day during the HBL period and thenceforth the family having to conform to this new routine and their lives subjugated by the online learning schedule. It didn’t have to be. There are many ways to make the experience less dehumanising for the family in the event we must undergo another period of HBL.

In between or once the children have completed the online tasks given by teachers, for instance, parents can take over the curriculum and get them to learn some home-based life skills. Start with the kitchen. Cook a simple dish together. Show them how to skin the fish. Let them the difference between a whole bulb and cloves of garlic. Show them how to mince the garlic and the different ways to cut an onion. Bake bread. Let them marvel at the process when flour is mixed with water. Show them how to knead the dough. As the saying goes, a family that cooks (and bakes) together stays together.

The HBL is nothing but the imposition of a temporary measure, albeit necessary during the circuit breaker period, by an institution we call school. It is never meant to replace the home or the family. Digital technology is indeed a useful tool to support learning. However, let us not allow it to dictate how we conduct our lives and steer us towards the destructive path where we end up being ‘alone together’ at home. As Sherry Turkle had once warned us, our devices are not only changing the way we communicate and interact with each other, but also who we are as human beings9. It is, after all, Home- Based Learning, not Computer-Based or Technology-Based Learning.

In learning new skills, what is urgent at this day and age are critical thinking skills that will empower the community to resist media misrepresentations of race, ethnicity, gender, class and other forms of cultural differences, and not merely stressing on the need to be conversant with digital technologies in order to be proficient in the use of new tools for study, work, play and living. It is important for leaders to recognise the need to empower the community to be involved in the production of meanings and representations, for “when groups often underrepresented or misrepresented in the media become investigators of their representations and creators of their own meanings, the learning process becomes an empowering expression of voice”10.

These are important steps that must be taken immediately lest we evolve into happy and satisfied automatons bound by the shackles of stupefaction normalised by the unquestioning embrace of digital technology “and its normalisation leaves us singing in our chains”11. ⬛