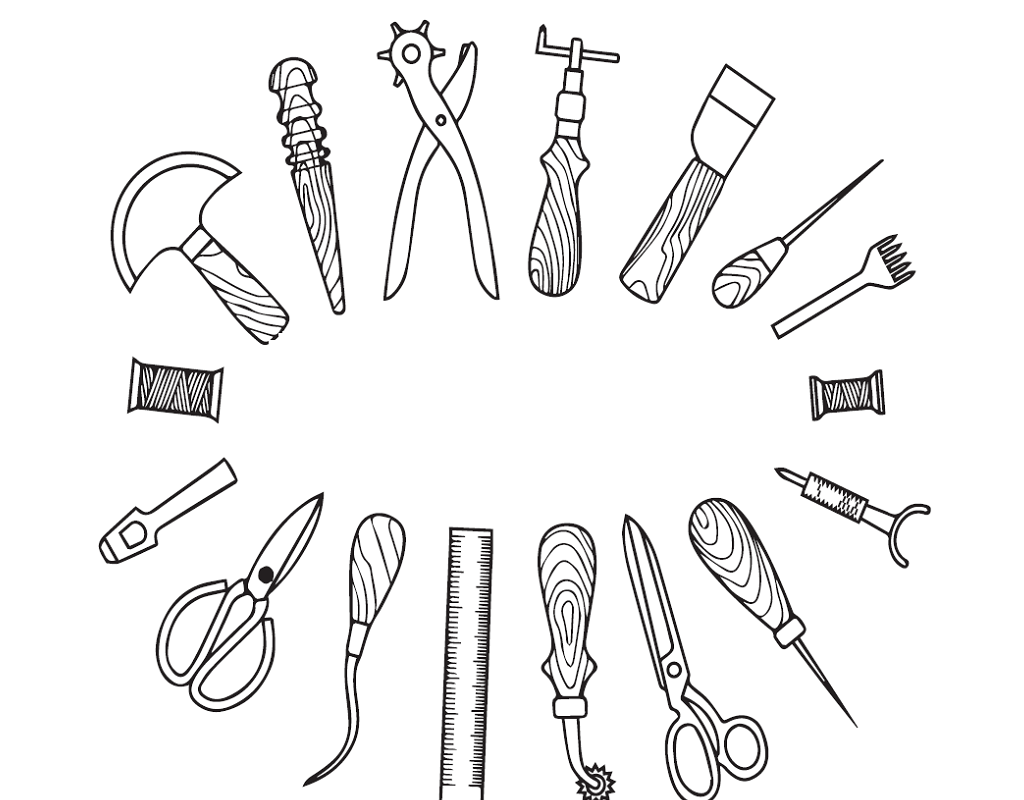 Leathercrafting is one of the oldest craft in human history, beginning in the prehistoric practice of using animal hides for clothing and shelter, before progressing into haulage items such as rucksacks and waterskins. Today, the techniques for the treatment and preservation of hides have become more sophisticated and the craft itself has served a wide variety of purposes: as sword scabbards, belts, straps and fittings for armour pieces, holsters, to name a few. Leather remains as a material of sturdy and long-lasting make, able to withstand the test of time and daily use. It has become almost a seamless part of our existence. Much of our leather products today are produced in factories and couched under names ranging from lesser known, lower quality brands to that which embodied luxury in a single monogrammed stamp. However, the reverse effect of rampant commercialisation is a growing interest in quality, handmade products and Singapore has seen a growth in the number of start-ups and home-based businesses delving in the homemade. Maketh Project and Forest Child are fine examples of such start-ups riding on the wave of handmade craft, one of a handful that specialise in leather.

Maketh Project and Forest Child are two entities run by a group of friends, partners and collaborators: Miss Adlina Adil, who is known for her roles on the Suria channel of Singapore’s television; Miss Joelle Rozeryna Rothman, who doubles as the group’s one-woman administrative, legal, and marketing wonder; Miss Addynna Azlinor, a former inhabitant of St. John’s Island, lead crafter, and the muse for the brand name Forest Child; and the newest addition and fellow leather craftswoman, Miss Netty Reindio.

It is important to note that the two entities are seen as separate and distinct. Miss Adlina cited customers’ initial mistake of not distinguishing the two as one of the challenges the group had faced in building their brands. Forest Child is the group’s brand name for their made-to-order and ready-to-wear nature- and pastorally-inspired leathergoods. Under this brand, customers can request custom-made products to express their individuality. Their ready-to-wear products are no less special, all of them — ranging from big crafts, such as backpacks, to more intricate ones, such as watch straps — meticulously handmade by the ladies themselves.

Maketh Project is the name under which the group conducts workshops in the art of leathercrafting. The workshops are conducted either on a group or individual basis where individuals can book an appointment to learn to make something they have a specific vision for. To this date, these workshops have collectively taught others to make items from those as simple as a cardholder to the more complex ones such as shoes and bags. Under Maketh Project, the group also lends its studio space and rents out tools to more experienced crafters who wish to work on their own projects.

COFFEE TABLE TO STUDIO SPACE
Forest Child is the first entity established by the group. It began with Dynna making journals, necklaces, and other accessories within the space of her own home. At the time, her work comprised mainly of using bits and pieces of remnant leather, tying and making them into earrings and other accessories. A lot of her creations at the time bore feathery, leaf-shaped motifs and paired with chains and drawings on canvas to give them the rustic look of what can only be described as a deliberate “beautiful accident”. The designs of the pieces are so seeing how Dynna is, as her friends and colleagues describe her, an introverted, “nature girl”, who had lived on St. John’s Island until she was thirteen before moving to the mainland. Her interest in the craft lies mainly in the quietude of the creative process. Joelle, on the other hand, comes from a background in apparel merchandising and art. Given her background, she was interested in the marketing aspect and helped to sell the pieces that Dynna made. As Joelle was the more comfortable of the two with technology, she set up a Facebook account to showcase and sell Dynna’s pieces in 2012, giving them intriguingly anthropomorphic names such as ‘The Journey’, and making sure to wear the creations when she was out. Together, they rented spaces in free flea markets at places such as now-defunct The Vault (at South Bridge Road) and Maad1 at the Red Dot Museum on weekends.. The name Forest Child came about from Dynna’s childhood background, which is a unique one in the glass and concrete Singaporean cosmopolis.

Before teaming up with Dynna and Joelle, Adlina, who was certain of wanting to have her own business from a young age, was busy with her home-based blogshop business where she sold apparels and other fashion items. Her first experience with leathercrafting was at a workshop where she learnt the fundamentals of cutting and finishing the leather before turning it into a seamless cardholder. Knowing of Adlina’s own ability with crafting works, Joelle had had the intention of recruiting the former into their posse. Adlina, on her end, saw the opportunity for collaboration in renting flea market spaces, complementing her own products with the duo’s leathergoods. One example of such a complement, Adlina recalls, was a handmade leather case to go with a pair of sunglasses she was selling. As such, they would showcase at flea markets as Forest Child and Travelling Trunk, Adlina’s then-name of her blogshop.

Adlina found herself happily co-opted into Forest Child after going to Dynna and Joelle’s home “workshop” in Woodlands. She was tasked to make a wallet which was posted onto the group’s Facebook page. From there, she found herself having to make a travel wallet, a feat for the novice leather craftswoman and one that she pulled off wonderfully. As she became more involved in the crafting process, she found less time for her blogshop and eventually, she decided to focus solely on leatherworking.

As the artistry and quality of their leather goods became more popular through advertising and outreach done on Facebook and Instagram, as well as by word of mouth, the group found themselves in need of a workshop space; for, as they quipped, their backs were breaking, having to bend over the coffee table. After some searching, they found one in Bali Lane, at the back of a vinyl store, Straits Record. Maketh Project came about when the trio needed a new source of capital to cover the rent of this roughly 25 square metre space. Recalling their past experience where fellow craftsmen were often guarded about sharing their knowledge with others, they decided to conduct workshops where they could share their skills with others and earn enough to be able to afford the studio’s upkeep. In a humorous anecdote, they shared how their first workshop saw their studio packed to the brim and as there was no air-conditioning, all of their participants were sweating over their pieces. However, not a single complaint was heard.

A BIG FLEA AND A BIG BREAK
While their business grew mainly from social media and word of mouth, their big business breakthrough came when they were showcasing their products at larger flea markets, such as the Public Garden and those organised by Makers of SG. It was through one such flea market that the restaurant Cut by Wolfgang Puck, which is located at Marina Bay Sands (MBS), and Four Seasons Bahrain got to know them. Upon seeing their workmanship, both chains had placed large orders of handcrafted leather placemats. With nostalgic humour, the ladies recollected the experience. While a placemat may seem like a simple thing, the tasks of cutting the leather, burnishing and polishing, puncturing each individual hole for sewing were all done by hand. So, imagine this done for upwards of 400 placemats per order. For Joelle, there was also the additional stress of figuring out the legal and logistical procedures of warehousing and shipping large orders without prior experience.

Over time, the ladies of Maketh Project and Forest Child received more of such orders, citing busy periods during the Hari Raya and Christmas holidays. As a result of this and growing workshop numbers, they needed a proper office and in mid-2015, they moved to their current space at Jalan Kledek. In this bigger locale, arrivals are met by a cosy set-up, racks of tools and the group’s products, and the distinct smell of leather. When asked if their journey has been a difficult one, Joelle and Adlina said that it had felt natural. Needless to say, it was not without struggle, rather that they understood it as part and parcel of the whole process of the business.

In this highly commercialised world where a company’s success is measured in terms of millions in annual turnovers, small businesses like Forest Child and Maketh Project are making headway by counting success in terms of meeting the needs and delivering value-added services to an increasingly diverse and demanding society. ⬛

The Maketh Project workshop is located at 751 North Bridge Road, #02-02, S (198719). For personal or corporate workshop bookings, you can email them at makethproject@gmail.com. They can also be found on Instagram, @maketh_project, and Facebook, @makethproject.

Forest Child leathergoods can be found and purchased on their website forestchild-leather.com, where interested customers can also place custom orders for the products of their design and choice. Forest Child can also be found on Facebook, @forestchildren, where you can see the beautiful products they make and past event-based showcases and collaborations.

Dr Nuraliah Norasid is a Research Associate with the Centre for Research in Islamic and Malay Affairs (RIMA). She holds a Doctor of Philosophy, with a specialisation in Creative Writing and Contemporary Mythopoesis from Nanyang Technological University.