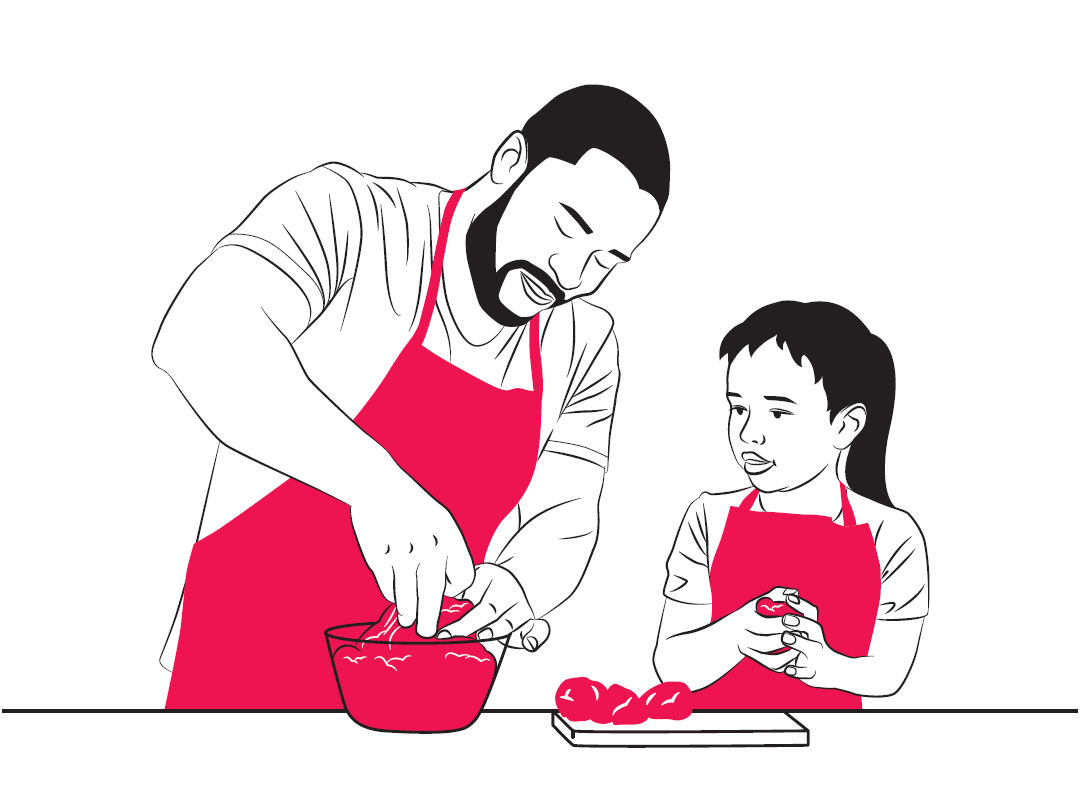 The White Paper on Singapore Women’s Development that was submitted to Parliament last month outlined the various challenges that women experience – from issues relating to caregiving work to the notion of a glass ceiling at the workplace. While the paper acknowledges positive developments for women over the years, there remains several unfavourable gender norms that are entrenched in Singapore society, such as the belief that women are, by default, the caregivers of the family and men, the breadwinners[1]. In 2021, Jamiyah Singapore organised a virtual event to gather views on ways to uplift the status of mothers. They reported that several female participants faced difficulties arising from preconceived notions in Malay culture where mothers are expected to take on the caregiving responsibilities of their children and the elderly[2]. The prevalence of such unequal gender roles in the family are said to be partly attributed by men in the family who see themselves as the ones liable for taking up the family’s breadwinner responsibilities. These beliefs become root causes that inadvertently make real the stereotypes.

Across Asia and the Pacific, the International Labour Organisation reported that in 2018, women spend 4.1 times more time in unpaid care work than men[3]. Taking a closer look at our society, the 2013 Survey on Social Attitudes of Singaporeans commissioned by the Ministry of Social and Family Development revealed that more than 50 percent of women indicated that they took on more caregiving and homemaking responsibilities compared to their male counterparts[4].

The White Paper subsequently highlighted that men must play a key role in encouraging mindset shifts in society. This can be done with them challenging gender stereotypes and being role models for others by taking on a more active role at home. At the same time, they should be championing for more equal opportunities for women at work. The wider implication, nevertheless, is that for Singapore to move to a higher plane of social progress, a whole-of- society effort is required where organisations, community partners, families and individuals play their part.

THE NEED FOR FATHERS TO BE EFFECTIVE PARENTS
According to the Singapore Fatherhood Public Perception Survey conducted by the Ministry of Community Development, Youth and Sports (MCYS) in 2010, 97 percent of Singaporeans are of the view that fathers play an important part in their children’s lives[5]. This sentiment is further affirmed by a 2013 study of juvenile delinquents by the Ministry of Social and Family Development (MSF) and the Singapore Prison Service (SPS), which found that at the national level, about half of young offenders were from divorced, single or reconstituted families and were reported to have had poor relationships with their fathers[6].

Aside from ensuring positive outcomes in their children’s development, greater involvement of fathers in parenting work also benefit their spouses on several fronts such as improvements in the latter’s physical and mental health, increased gender socialisation, as well as enabling them to pursue their education and work goals. In the same way, women’s participation in the workforce not only adds to the family’s overall financial stability, it also affords these wives with a sense of financial freedom and security. Finally, involving men in caregiving work will also provide husbands with opportunities to relate their experiences with that of their wives and children.

In April 2022, we published the findings for our study on Challenges to Effective Parenting Experienced by Malay-Muslim Fathers. The Institute of Policy Studies research project revealed that Singaporean Malay-Muslim dads do recognise the importance of being present and spending quality time with their children[7]. They are aware of the negative consequences should they delegate this responsibility entirely upon their wives. By their own admission, the need for “freedom of time” to devote to their family should be a priority regardless of work demands.

Interestingly, though unsurprising to the community, the findings on Malay-Muslim fathers show that Islam is regarded by participants as the main source of knowledge, which they defer to when seeking guidance on parenting practices. However, while Friday sermons consistently exhort the value of equity in gender roles in the household, some Malay-Muslim fathers still find difficulty in seeing themselves as similarly suited for childcare as their wives. Still, they have expressed their desire to take on a more equitable share of family responsibilities with their spouses and are moving towards the direction set out by the Women’s Development White Paper. This includes allowing for dual income in the family and dedicating as much of their free time to parenting their children. Although such aspirations cannot yet be said to represent the views of all fathers who participated in the study, these sentiments reveal changes in the social construct of gender ideology whereby both parents are now willing to take on a more equitable share in the upkeep of the family.

Some fathers also voiced their appreciation of their wives’ efforts in transforming them into better dads, such as correcting their beliefs regarding gender roles in their family. A respondent, for instance, explained how as a result of learnt behaviour, his notion of an effective father had been one that dictates and expects total obedience from his family. Over the years, this view was slowly ‘chipped away’ by his wife, resulting in a changed attitude and behaviour that have made him the better dad that he is today. The study revealed that wives are also part of the driving force in creating this change, as they now play an increasingly equitable role in their households while still acknowledging fathers as the primary decision maker in the family. Overall, the changing worldviews have enabled wives to take on roles that were previously the exclusive domain of fathers.

CHALLENGES TO EFFECTIVE PARENTING FACED BY MALAY-MUSLIM FATHERS IN SINGAPORE
Despite these positive developments, it appears that Singaporean Malay-Muslim fathers continue to see themselves as the de facto income-earner in the family. In placing their trust behind the ideology associating role and gender, a number of Malay-Muslim fathers are still reluctant to entertain the idea of sharing the responsibility of providing for the financial needs of the family with their spouses, let alone thoughts of relinquishing it altogether if a situation develops. Gender roles, to them, are clear-cut and absolute. When these fathers go out to work, they expect their stay-at-home wives to take up the role of caring for their children. Such beliefs in the exclusivity of gender-based division of labour within the family unit unfortunately take away opportunities for them to spend time with their children.

In addition, many fathers admit to not being able to effectively communicate with their spouses and children. While many have successfully navigated complex issues during their parent-child conversations, there are some topics that remain out of reach. These include discussions on themes that cover matters of romantic relationships, expectations of the future and personal beliefs. It translates into a certain awkwardness in their ability to initiate genuine conversations with their loved ones. What results is often emotional distancing and, in the case with children, the proverbial generation gap develops.

LOOKING AHEAD
While fathers are contributing more as caregivers of their children, the scope of their involvement remains largely limited. The ability for men to take on the role of an active father is constrained by challenges at the individual, community and policy levels.

For a start, fathers need to be instilled with knowledge on how to be a good parent. The research tells us that social networks can provide an important source of fathering know-how for Malay-Muslim fathers. The closest of these networks comprise immediate family members and friends. These networks provide a strong influence, which can have an impact on the attitude and behaviour of its members. It goes without saying that fathers in need of the correct parental knowledge should be introduced to social networks that will have the capacity to mould them into better dads. The idea of support groups such as MENDAKI’s Family Excellence Circle is a model worth emulating[8].

As far back as 2012, there was talk within the Malay-Muslim community of establishing a parents’ school where mothers and fathers could learn various strategies to perform their roles better[9]. Though the idea has not taken off, it is still worth diving into. There are some organisations, such as the Centre for Fathering, which have been pushing for the materialisation of this idea.

For men to become more effective caregivers, support at the individual and community level is insufficient. What is further required are policies and programmes that challenge unequal gender norms and promote gender equality. For instance, interviews conducted during the aforementioned IPS study on Malay/Muslim fathers indicate that many respondents are apprehensive about the stigma they will face in the workplace should they chose to place higher priority for childcare responsibilities over their work. In fact, an earlier IPS study conducted in 2020 focusing on stay-at-home fathers reported that when fathers make such life choices, they experienced “acute stigma” not only from society, but also family members and friends[10]. A suggestion is for the government to promote the creation of a supportive workplace environment that normalises fathering traits that pursue a balance between work and family responsibilities. This is one way to signal to society that fathers who show aptitude at caregiving work are valued. Such policies will not only encourage men to be more involved in parenting, they also bode well for gender equality in the workplace.

There is still much to learn about the ways in which fathers can contribute to caregiving responsibilities in the household. Nonetheless, the importance of their role in nurturing their family is indisputable. Likewise, as with all fathers, our research has shown that Malay-Muslim fathers aspire to be good parents. With the change in attitude indicated by the study, they may well be on their way to becoming the ideal father they aspire to be. ⬛

Dr Shamsuri Juhari is Research Fellow at the Institute of Policy Studies, National University of Singapore. Jeanne Tan is Research Assistant at the same institute.