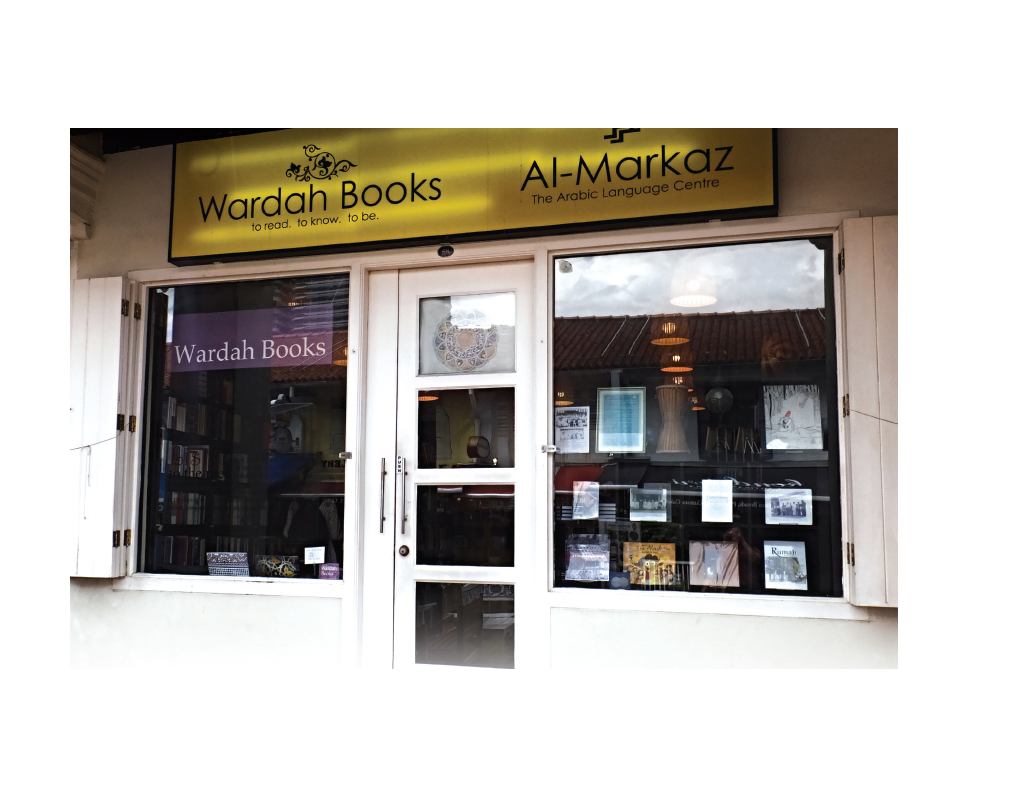 Midday, and though the sky is leaden signalling the rain that would soon come, the pristine common path between the rows of shophouses leading up to the golden-domed majesty of the Sultan Mosque is already teeming with arrangements of tables and chairs from the Turkish restaurants, racks of tourist-trap paraphernalia, displays of voluminous skirts, colourful pashminas, and opulent Persian rugs. But amidst the economic hubbub of the vibrant heritage space, respite can be found at number 58 on Bussorah Street, the only shopfront without any spillage into the common corridor.

The entrance to the bookstore is helmed by two simple shop windows, one allowing you a glimpse of the packed bookshelf in the far left and the other displaying artful photographs, book covers and magazines. Upon entry, it is almost easy to believe that you have walked into a private library.

When told this, Mr Ibrahim Tahir, the grandson of the late Ahmad Mohamed Ibrahim, Singapore’s first Attorney- General[1], reveals that the intention was to make Wardah Books, which he co-founded with his wife, also a book lover, feel like one’s living room. This was the main reason why in its earlier days, the bookstore used to have a sofa and a coffee table, before space constraints required Ibrahim to free up space for more shelves and books.

FROM MEDICAL DEGREE TO BOOKSELLER
At one time, Ibrahim’s future looked set to be one pursued in medicine. Ibrahim loved the science of it, and, from his studies in Ireland, picked up skills in thinking critically, interrogating one’s facts, observing patterns and identifying problems and pathologies. However, it was not always a pleasant journey for everyone. Ibrahim shared that facing death and disease every day brings with it an immense feeling of powerlessness. One can’t do anything about it, but the tragedy is that the patients look to you thinking that you can. That, amidst his own personal tragedies, made it difficult for him to enter the hospital and he would often find himself broken-hearted. Upon returning to Singapore, he decided to pursue a career involving books, for if there is one thing he knows for certain, it is his enduring love of books and reading.

He joined the book industry as an editor in educational publishing with Education Publishing Bureau (EPB) and Singapore National Publishing (SNP)[2], working mainly on textbooks, assessment books and workbooks for levels ranging from nursery to secondary school. He spent some four years in educational publishing before moving on to general publishing with Edition Didier Millet (EDM), where he was roped in to work on massive reference books such as Singapore: The Encyclopedia and Singapore Biodiversity: An Encyclopedia of the Natural Environment and Sustainable Development, the latter of which was produced just before the opening of the Lee Kong Chian Natural History Museum in the National University of Singapore (NUS). Ibrahim shared that the skills he had learnt in his training to become a doctor was immediately transferrable in editing, making the switch a pretty smooth and easy one for Ibrahim.

It was during this time as an editor that he progressed into book distribution. Ibrahim had always harboured a love for Islamic books and found that many of the books he wanted to read, especially those in the English language, were not available in Singapore, what more in the general bookstores. Bookstores carrying Islamic books were often Malay bookstores with a single shelf of English books. To his recollection, in the past, some of the perfume shops on Arab street used to sell English medium Islamic books in their back rooms. However, those books were mainly from Karachi and Lahore, and written in a rather archaic, Victorian-style English that would not be appealing to readers today.

Seeing a dearth of this specific reading selection, he decided to take matters into his own hands, working with publishers such as Fons Vitae, to bring their books in to Singapore and distribute them. He described himself as being almost like an agent for these publishers, introducing their books to the various Islam-oriented bookstores and also organisations such as the Muslim Converts’ Association of Singapore. As he was working full-time then, he worked on Saturdays to “go from door to door with a suitcase of books” to introduce the titles to existing booksellers and taking orders for them. He even managed to distribute the books to major bookstores such as Kinokuniya in both Singapore and Malaysia; however, he found that the books were not “taking”. He realised that a person walking into an Islamic Malay bookstore would not be seeking out titles in English, and perhaps not books with a specific focus on Islamic philosophies when they enter a major chain bookstore. 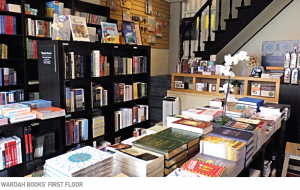 His first brick-and-mortar store came as a stroke of luck when he learnt from a proprietor of a perfume shop in 709 North Bridge Road that the property next door was up for rent. Ibrahim decided to take it despite having neither stock nor staff. The layout of the time comprised no more than 2 bookcases from IKEA, a sofa and coffee table. He was there for one and a half years before the collapse of the Nicoll Highway led Warees[3], a company managing the property at that time, to consider the structure of the shop unsound and Ibrahim was given two weeks’ notice to leave. He was lucky enough to be able to rent the upper floor of a carpet shop, which would later become the Wardah Books that we see today.

A VIBRANT HISTORY OF BOOKS AND READING
Wardah Books’ current location on Bussorah Street, though quite by happy accident, is right smack in the historic site of Malay print and publishing, as well as reading, heritage. When asked about the history of reading and its development in the Muslim community in Singapore, Ibrahim explained that there are several traditions of reading known to Islamic scholarship and its communities. They can be classified into the more personal style of reading that we all understand, the halaqah (group-based) and khas (one-to-one) styles of reading, and a much higher level where a teacher teaches the notes and commentaries – syarahs – on certain Islamic texts. The halaqah, meaning circle or ring in Arabic, generally refers to a group of students who are studying under a certain professor or teacher[4].

The first indigenous Malay/Muslim printers and publishers emerged in Singapore around the 1860s[5]. Many of them were immigrants from Java and who settled in the Kampong Gelam area[6], then a “bustling commercial centre” of businesses which catered to the local Muslims as well as Hajj pilgrims on their way to Mecca[7]. Here they thrived right up to just after the 1900s. Ibrahim attributed the booming of the Malay/ Muslim printing and publishing industry to the halaqahs.
He shared that in order for the halaqahs to go through a book, the text would be broken up into what we would conceive today as chapbooks. These chapbooks, better known as kitab kuning, were printed cheaply and staple-bound, and comprised just chapters of the texts that the students would bring to the mosques and to their halaqahs. This then spurred the industry to produce the books to meet the religious reading needs of the communities. Depending on the popularity of the sheikh or teacher, there could be as many as hundreds of students per halaqah needing these publications for their studies. Some of the teachers, Ibrahim explained, would come with their own manuscripts to have them printed in the Kampong Gelam area. 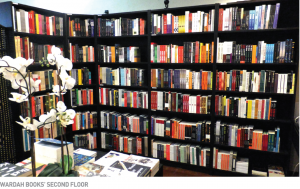 READING AS A CIVILISATIONAL ACTIVITY, AND WHY IT IS IMPORTANT
There is a certain, much-needed quietude to reading, and Ibrahim considered it to be a lot like meditation where one can centre one’s self, no matter what the subject of the text. For sacred texts, such as classical Islamic texts, there is the added dimension of bringing the reader out of the mundane and towards a state of transcendence. Much the way sacred art, such as Islamic calligraphy, Islamic architecture, qasidas, a form of writing poetry, songs and recitations of the Quran may do for others.

Ibrahim also considered reading to be a civilisational activity – an act or process of civilising that brings an individual or group out of a less refined stage into one of civility – intertwined into which are truth-seeking and a love for knowledge[8]. Books are the only way current civilisation can build on past knowledge and books, in a way, also help to bring a level of centrality of knowledge to our lives. To lose this civilisational act of reading would mean the loss of that instinct of truth-seeking, leading societies and communities into regression.

When asked what could be done to bridge this reading gap in our society, Ibrahim answered that adults need to read more, as the essence of promoting book-reading, as it is with the occupation of book-selling, is the transference of enthusiasm. When you love a book, there is a chance that your love of that book would transfer to another person. (That is how my fiancé managed to get me to read Ernest Hemingway’s acclaimed novella, The Old Man and the Sea, a story about the universal truth that which is our existence in this world.) For him, he found that he tended to push the books that he loves and opined that booksellers need to read and love the books before they could promote them. This has led him to treat his business as a service industry rather than a retail one.

True to his word, when I sought recommendations for works on religious eschatology for research, Ibrahim was not only able to give me valuable insights into the topic, but also located a stack of books on the topic. (I bought them all.)

BOOKSELLING, NOT ALWAYS AN EASY TASK
As with any business, Wardah Books has seen its ups and downs. Ibrahim shared that he almost had to sell the bookstore during Singapore’s period of economic slowdown, but the thought of it was “like giving away a child”. Apart from that, when it first started, Wardah Books also faced the challenge of highly polarised attitudes towards religion and religious scholarship that existed within the community. Here, Ibrahim recounted experiences of people coming into the bookstore or writing in to forums to call him out for selling books on Sufism or books that oppose Salafism, and even, on one occasion, an individual who outright issued a death threat. In spite of these challenges, Wardah Books pushed on, driven by a love for books and a love for reading, and a heartfelt, deeply-held belief in those two key aspects of a civilised society. And 16 years on, I am glad that Wardah Books is still around to meet the needs of this generation’s readers of Islamic texts and philosophies in the English medium.

Coming down from the steps across Wardah Books’ shop windows, into the beginnings of a drizzle, with a bag full of books (about the bleakest of human prospects), I am recalled to Ibrahim’s sharing of a quote in a hadith that urges one who held a seedling to plant it even when the world is coming to an end around them. And I cannot help but feel that this bookstore is that seedling sown in such an hour. ⬛

Dr Nuraliah Norasid is a Research Associate at the Centre for Research on Islamic and Malay Affairs (RIMA) and author of The Gatekeeper. She received her Doctor of Philosophy in Creative Writing and English Literature from Nanyang Technological University (NTU) in 2015.