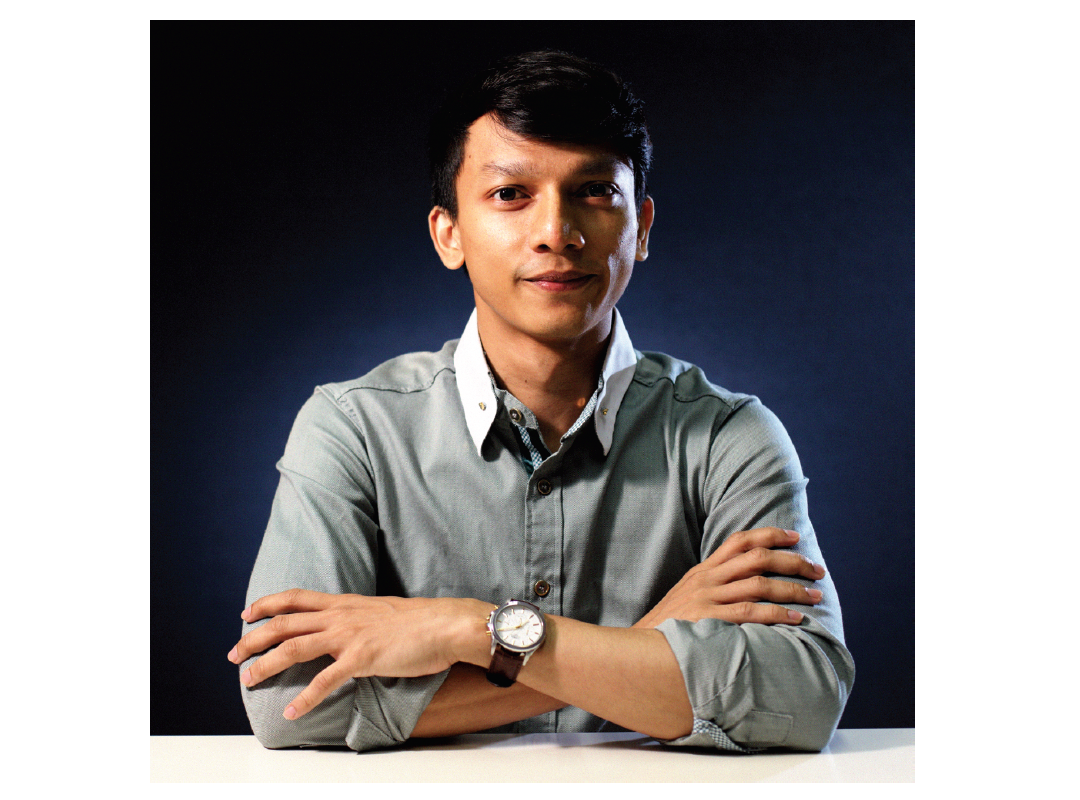 When we think about user experience or UX, we instantly associate the term with apps and websites. UX was first coined in 1993 by cognitive scientist, Donald Norman, who needed a term that would encompass all aspects of a person’s experience with a system, including industrial design, graphics, interface and physical interaction. Today, UX has become a rapidly growing industry with jobs on the rise. A career in the industry encompasses many different roles from product manager, UX designer, UI designer, content designer to UX researcher.

Anwar Abdulhaqq, 33, who first started as a Management Consultant, now specialises as a UX Researcher at a global fintech company based in the UK. Anwar shares his insights on the UX industry and the work he does, with The Karyawan team.

Q: Could you tell us more about yourself and your family?
Anwar: I’ve been in the UK since I first came here for my degree studies ten years ago. After graduating with a Bachelor (Honours) degree in Economics and Middle Eastern studies, I stayed on to work.

I grew up in a fairly average environment. My family lived close to my grandmother, as well as some of my uncles and aunts. They helped to take care of my brother and me, while my single mother was out working. We weren’t rich, but had all we needed, alhamdulillah.

I first thought of studying abroad probably at the age of 18. Despite not having immediate ideas on how to achieve that goal financially, my mother gave her blessings. Until today, we’re not entirely sure how we achieved it, considering my mother didn’t earn much. A lot of things had to fall into place for me to study in the UK, and somehow they did! May God bless all those who have had a hand in this, including family and friends. The best explanation I can give is that a mother’s prayers is really powerful.

Q: What drew you to a career in the UX industry? What is UX and is there a big demand for UX practitioners?
Anwar: When I first heard the term UX, the first thought that came to mind was graphic designers and creatives who design what you see on screen. Once I understood what UX actually is, I knew it would be the perfect career path for me as I would be able to combine my natural interests in business and technology, as well as satisfy my curiosity around the human mind and figure out why people do the things they do.

UX is a multidisciplinary field which blends the subject of technology and human psychology. But if you think about it, almost everything is an ‘experience’. From figuring out how to get to a location you’ve never been to before by keying in the address into Google Maps, to using your banking app to initiate a PayNow transfer.

The key difference between the UX and traditional methods of approaching a problem and creating a product lies in their focus. When you approach a problem from a UX perspective, it is what we call human-centred. We would involve real users very early on in the process to uncover their needs. This happens way before we ever develop a single line of code or manufacture a single part of a physical product. In effect, we are learning directly from the users we are designing solutions for, instead of taking cues from heads of corporations who may think they know the solutions to a user’s problems, but actually don’t.

While the roots of UX go a few decades back, it is still considered young as a formalised industry. Nonetheless, its value and importance are growing in recognition in corporate boardrooms, as well as young start-ups. Today, brands like Apple, Google, Facebook, and AirBnB credit their success to this human-centred approach of solving user needs. Even smaller companies like Grab and NinjaVan have embraced the approach from their early days. If you enjoy using an app on a daily basis, you can be guaranteed that there have been many hundreds of hours of UX research that has gone into creating that experience! So as technology gets more complex in the coming decades, with the growth of artificial intelligence, machine learning, and blockchain, etc., the demand for UX practitioners will only increase as we figure out the best ways to leverage them to solve human problems.

Q: What does a UX Researcher do?
Anwar: I’m currently with a global fintech company called Wise (formerly TransferWise) which values UX talent and specialisms. As a product proposition, Wise seeks to make money ‘borderless’ by offering an international account which enables you to spend money in any currency, anywhere in the world. Our customers come from many different backgrounds, from expats and international students to people who shop online in foreign currencies and people buying property abroad.

As a UX Researcher, I mainly do primary research. My job is to uncover the needs of customers (and potential customers) and make sure that all the products and services we come up with meet those needs. So, my work could entail interviewing people to understand their mental models around opening a financial account (what we call generative research), to letting users walk through our prototype apps to uncover their pain points (evaluative research). My work will then inform UX Designers on what and how to design, and their work, in turn, will flow to the Developers who will code our app and ship it to our customers. Once done, we will study the data, and I might have to do more usability tests to decide if we need to make a better iteration or not, and it goes on.

It’s not as simple as speaking to people though! Everything we do is (ideally) backed by evidence and data, and is based on the science of human psychology (among other sciences).

Q: What are the pros and cons of working in this industry in Europe compared to Singapore?
Anwar: I’m probably biased, having been in the UK for 10 years now, but from a career perspective, there are definitely more pros than cons.

UX as a concept and industry is far more mature in Europe than it is in Singapore, meaning that there are a lot more companies paying well for good UX talent based in Europe. It also means that I have a lot more experienced colleagues to learn from on a day-to-day basis, as well as at conferences, etc.

Q: What made you decide to leave Singapore and work overseas?
Anwar: I’ve always been globalist and international in my outlook. From a young age, I’ve been reading up on international relations, global politics and conflicts, etc. I also love learning about different cultures, languages and religions.

So in that regard, I’ve always seen Singapore as a small dot of safe haven, and that there’s a larger world out there to explore. Afterall, God created a vast expansive world and it is humans who restrict ourselves to borders. So, I see myself as a global citizen in that sense, rather than just a Singaporean.

My main goal is to set up a second base elsewhere and get at least a permanent residency, so I could be more geographically mobile and borderless.

Q: What were some of the challenges you’ve faced while in the UK?
Anwar: One of the biggest challenges is the visa or immigration system. As a foreigner, I need visa sponsorship from the companies I work for to be able to live here legally. What this means is that companies have to incur additional costs to hire me compared to hiring a British (or someone from the EU). As a result, my pool of potential companies to apply to is limited as majority won’t sponsor visas, and I have to prove to these companies why I’m worth that additional cost.

Another thing I struggled with was adapting to the British way of socialising and communicating. I’m really blunt by nature so I am used to speaking my mind. But the British, overall, are quite indirect. They love small talk, skirt around issues, and try to avoid conflicts. So I’ve had to learn to reach a middle ground where my honesty is not received in a harsh way.

Q: How different are the culture and lifestyle there compared to Singapore? Do you face discrimination?
Anwar: I have genuinely not faced any sort of explicit discrimination, especially in a city as diverse as London. What you see on the news is typically sensationalised to the point where it skews actual realities on the ground. Most people here are ‘colour blind’, to the point where sometimes they’re afraid to discuss race issues.

In fact, I would go so far as to say that the UK, and London especially, is a lot less racist than in Singapore, where a lot of things are viewed through a racial lens. People here are very accommodating. For example, in every large global organisation I’ve worked with, there has always been a prayer room for Muslims.

Another cultural aspect that I truly value here is that there’s very little culture of ‘face time’ at work. You’re expected to manage your own time and in general, will be judged by your output, rather than how much time you show your face in the office.

Q: What have been the highlights of your career or life in the UK so far? Any plans to return to Singapore?
Anwar: One of the most interesting memories I have is conducting a usability testing of a government website with people with disabilities. Some of them were totally visually impaired, and others couldn’t use physical keyboards. It was amazing to see how they overcome such adversity, and how much technology has advanced to enable a more inclusive world.

With regard to returning to Singapore, I definitely don’t have it in my mind that I have left for good. I try to visit once or twice a year and keep in touch with friends and family back home every day!

Q: What is your advice to Malay/Muslim youths who aspire to be a UX researcher like you?
Anwar: For some general advice, I would say that it’s important to get advice from proper sources, whether it’s about studying for a specific subject, or choosing a career. Many in our community do not get the right advice from the right people. It’s best to speak to those who have done what you are trying to achieve.

Don’t be shy about networking! I’ve found LinkedIn to be particularly useful. I’ve reached out to countless ‘strangers’, had virtual meetups, and sought their advice on how to get to where I want to be. It’s no exaggeration to say that I wouldn’t be where I am today if not for them. Some have even done direct internal referrals for me when I wanted to apply to their companies.

For UX research specifically, I would say that having a natural curiosity about humans and why people do the things they do is a must. Beyond that, it’s important to continually learn UX skills, whether it’s from paid bootcamps or free online courses, so you can have a good grounding on the different approaches and methodologies. ⬛

Nur Diyana Jalil is currently an Executive at the Centre for Research on Islamic and Malay Affairs (RIMA), managing its social media, events and publication.